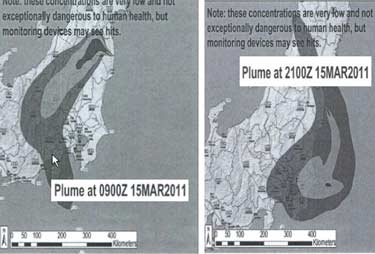 – Professor: U.S. personnel destroyed thousands of documents to prepare for evacuation of Japan after 3/11 — Bloomberg: “Near-Chernobyl experience” for Tokyo even though 200+ kilometers from Fukushima (ENENews, Feb 8, 2014):

Bloomberg, Willianm Pesek in Japan, Feb. 6, 2014: […] Anyone who lived through Tokyo’s near-Chernobyl experience in 2011 may recall how poorly NHK performed even then. The network downplayed risks at every turn to avoid panic. Many of us learned about explosions at Fukushima from CNN, BBC and U.S. military news conferences, not Japan’s most trusted news source. Just imagine the next time disaster strikes. Abe’s secrecy law means journalists and whistle-blowers can go to jail for reporting what the government doesn’t want the public to know. It’s nice to know that during the next crisis, when we’re desperate for news, NHK will be ready to distract us with cheerful PR puff pieces. It’s now official policy.

Number 1 Shimbun, Foreign Correspondents Club of Japan, Feb. 4, 2014: Paul Blustein, former Washington Post [and Wall Street Journal reporter who is now affiliated with the Brookings Institution] […] accuses some present members [of the  FCCJ] of propagating misinformation — even of “journalistic malpractice.” […] “I’m referring to the oft-repeated claim that the accident came perilously close to irradiating the Tokyo metropolitan area. […] it is massively at odds with the facts. Propagating it is not just misinformation; it can now be fairly deemed an act of journalistic malpractice […] It pains me to level such accusations at fellow journalists […] Leading the pack was the New York Times, which carried a front-page story on Feb. 27, 2012 asserting that Kan and his fellow Japanese leaders “secretly considered the possibility of evacuating Tokyo” […]  Jeffrey Bader, who had served on President Obama’s National Security Council, explained that modeling of radiation plumes and weather patterns by Lawrence Livermore National Laboratory – one of the government’s premier scientific facilities – had shown there was no need to consider evacuating Americans from the Tokyo metropolitan area.” […]

Rebuttal from David McNeill, The Economist, Feb. 4, 2014: […] I’m puzzled by this criticism. It seems to suggest that we should outweigh or dismiss the views of Japan’s sitting prime minister at the time of the disaster in favor of those of some U.S. officials in Washington. It also seems to ignore the growing body of evidence to the contrary. To cite only the latest intervention into this debate that I know of, Kyle Cleveland of Temple University Japan has written a well-sourced essay this year revealing that U.S. officials in Japan were concerned enough in March 2011 about the possibility of evacuation to have destroyed thousands of documents at military and diplomatic facilities. Mr. Blustein may also be aware that Kevin Maher, former director of the Office of Japan Affairs also said in his 2011 (Japanese) book, The Japan That Can’t Decide, that U.S. officials in Japan planned to evacuate 90,000 citizens from Tokyo during the disaster. […]

If you still live in Tokyo …. you should RUN FOR YOUR LIFE!

(In case you need help because you {and your doctor} do not know how to detox your body from Fukushima radiation, then you may contact me if you wish. I will help you.)

And here is why: