Yesterday we reported a warning by BNP that “The Run On Ukrainian Deposits May Have Already Started.” Obviously, while the real implications for the country’s financial system should a full-blown bank run emerge would be dire , they would take some time to manifest themselves, especially since as Interfax reported, the country’s central bank still has $17.8 billion in reserves as of today (if sliding at an alarming pace). To be expected, overnight the same central bank reiterated its support for the currency, knowing that the last thing it can afford is an evaporation in confidence:

The government also promplty chimed in:

However, judging by the surge in Ukraine CDS ealier today, which soared by 89bps to 1,089bps today, highest since Dec. 10 on closing basis, i.e., before the Russian bailout (which may or may not be concluded), investors are hardly convinced by the local developments. 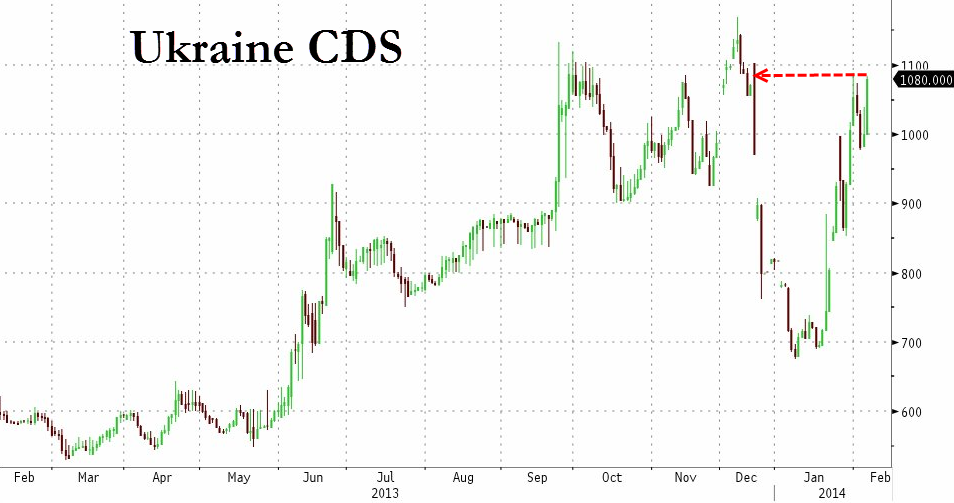 And the final confirmation that very soon it will be all up to a Russian bailout to fix the situation, was news from minutes ago that the Ukraine just had a failed bond auction:

Then again, Russia itself had a failed bond auction just days ago, so perhaps it has bigger fish to fry than pre-funding the Ukraine rescue package, even though the Ukraine is now nothing but the proxy war venue for sphere of influence between Russia and the insolvent EU.

So while the carry trade has soared today in a furious attempt to mask all the other bad news, certainly keep an eye on the EM and peripheral countries (Ukraine, Argentina, etc). Because despite what some manipulative (central bank-based?) FX trader wishes to represent, things are not getting better and the longer the Fed’s tapering experiment continues, the worse it will get.