– U. of California Dean: We detected “far more than I expected” of Fukushima radioactive sulfur after 3/11 — “Unprecedented increase” reported by chemists — Statement to Media: “I don’t think we’ll see anything” (ENENews, Feb 5, 2014):

La Jolla Light, Feb. 4, 2014: Two weeks after the March 2011 Fukushima nuclear disaster, UC San Diego atmospheric chemists noticed an unprecedented increase in radioactive sulfur in La Jolla’s air […] [Mark Thiemens, dean of physical sciences and] a crew of UCSD atmospheric chemists reported the first quantitative measurement of the amount of radiation leaked from the damaged nuclear reactor in Fukushima, following the devastating earthquake and tsunami there. Their estimate was based on radioactive sulfur that wafted across the Pacific Ocean after operators of the damaged reactor had to cool overheated fuel with seawater — causing a chemical reaction between byproducts of nuclear fission and chlorine ions in the saltwater. Thiemens has, for the past several years, unsuccessfully sought to obtain grant funding to follow-up his research […] neither the U.S. Nuclear Regulatory Commission, Environmental Protection Agency, California Air Resources Board or National Academy of Sciences (of which he is a member) were interested in funding additional research to measure the Fukushima fallout. 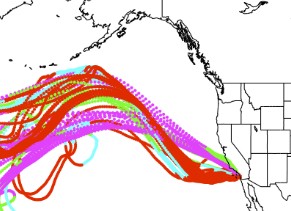 What Dean Thiemens stated publicly before detecting Fukushima radioactive releases: Thiemens stresses that harmful radiation will not reach the West Coast. He said he doubts whether the radiation will even be detectable.  “It’s a long way from here to there,” he said. “I don’t think we’ll see anything.” Thiemens pointed out that even at Chernobyl, the worst effects of the radiation were felt in about a 1,000-mile ratio. San Diego is roughly 5,500 miles from the Japanese coast.

What Dean Thiemans wrote to a colleague soon after (FOIA of NRC document): […] we have detected the excess 35 in both S02 and S04 at exactly the time we expected based upon  trajectories. It corresponded to when the salt water was added […] It looks to be a perfect and clean signal, far more than I expected, and a prefect peak in both gas and solid, we also can get some idea of what actually happened in the chemistry and perhaps the neutronization.The Japanese have a consortium of radioactivity measurement people and they asked me to participate and they will provide aerosols, rain etc for us to measure. I would like to but it is far in excess of funds I have to do it. […] it is my sense that I should make these measurements as sulfur is the only radioactivity at the right half life to simultaneously measure as a gas and solid. It can tell us not only about the neutron strength, it also says a lot about the transmission through the environment […]

More on the ‘neutronization’ at Fukushima here: Study: Evidence of “uncontrollable nuclear reaction” at Fukushima after 3/11 — “Emerged criticality” supported by data (PHOTOS)

1 thought on “UCLA Dean: We Detected ‘Far More Than I Expected’ Of Fukushima Radioactive Sulfur After 3/11 – ‘Unprecedented Increase’ Reported By Chemists – Statement To Media: ‘I Don’t Think We’ll See Anything’”