– The Countdown to the Nationalization of Retirement Savings Has Begun (International Man – Casey Research, Feb 5, 2014):

Simply put, the new myRA program put forward by Obama is at best a sucker’s deal… or worse, it’s a first step toward the nationalization of private retirement savings. (Note: If you haven’t yet heard of myRA, I’d strongly suggest you read this excellent overview by my colleague Dan Steinhart.)

Even before the new myRA program was announced, there had been whispers about the need for the US government to assume some risk for US retirement accounts. That’s code for forced conversion of private retirement assets into government bonds.

With foreigners not buying as many Treasuries and the Fed tapering, the US government has been searching for new buyers of its unwanted debt. And this is where the new myRA program comes in.

In short, it’s ostensibly a new way for people to save for retirement. Of course, you can only invest in government-approved investments—like Treasuries—which probably won’t even come close to keeping up with the real rate of inflation. It’s like Jim Grant says: “return-free risk.”

In reality, a myRA doesn’t really provide any significant new benefits over existing options. To me it just looks like a way for the US government to pass the hot potato on to unsuspecting Americans in exchange for their retirement savings.

The net effect is the funneling of more capital to Treasury securities and thus helping the US government finance itself.

You’d be much better off using a precious metals IRA to save for retirement than participating in the government’s latest Ponzi scheme.

There are other protective strategies as well, such as internationalizing your retirement savings into assets that are hard, if not impossible, to confiscate on a whim—like foreign real estate and physical gold held abroad. More on that below.

As bad as it is to deceive naïve Americans into trading their hard-earned retirement savings for garbage (i.e., Treasury securities), the myRA program potentially represents something far worse… the first step toward the nationalization of existing private retirement accounts.

I believe myRA is a way to nudge the American people into gradually becoming more accustomed to government involvement in their private retirement savings.

It’s incorrect to assume nationalization couldn’t happen in the US or your home country. History shows us that it’s standard operating procedure for a government in dire financial straits.

In just the past six years, it’s happened in some form in Argentina, Poland, Portugal, Hungary, and numerous other countries.

To me it’s self-evident that most Western governments (including the US) have current debt loads and future spending commitments that all but guarantee that eventually—and likely someday soon—they will try to unscrupulously grab as much wealth as they can.

And retirement savings are a juicy target—low-hanging fruit for a desperate government.

Naturally, politicians will try to slickly sell the idea to the public as something “for their own good” or as “protection from market instability.” This is how similar programs were sold to skeptical publics in the past.

In reality, governments take these actions not to “reduce the risk” to your retirement savings or whatever propaganda they happen to come up with, but rather to obtain financing—by forcefully dumping their unwanted debt onto seniors and savers.

Below are several ways it has happened or could happen. Of course, there could always be some sort of new, creative proposal that was previously unthinkable. No matter the method, however, the end result is always the same—the siphoning off of purchasing power from your retirement savings.

New Contribution Mandate: The government could mandate, for example, that 50% of new contributions to private retirement accounts must consist of “safe,” government-approved investments, like Treasury securities.

Forced Conversions: This is where a government will forcibly convert existing assets held in retirement accounts into so-called “safer” assets, such as government bonds. For example, if the US government forcibly converted 20% of the estimated $20 trillion in retirement assets (401k plans, IRAs, defined benefit and contribution plans, etc.), it would net them $4 trillion. Not a bad score, considering the national debt is north of $17 trillion.

Special Taxes: The government could look into levying special taxes on distributions from retirement, especially those deemed to be “excessively large.”

In order to be more effective, forced conversations probably wouldn’t happen until after official capital controls have been instituted. Once in place, capital controls would make it very difficult, if not impossible, for you to avoid the wealth confiscation that is sure to follow… like a sheep that has just been penned in for a shearing.

Since FATCA and other regulatory burdens already amount to a soft form of capital controls, it’s absolutely essential that you start implementing protective measures now.

It’s like I have always said: internationalization is your ultimate insurance against the measures of a desperate government. In the case that the government makes a grab for retirement savings, it’s much better to be a year or two early rather than a minute too late. 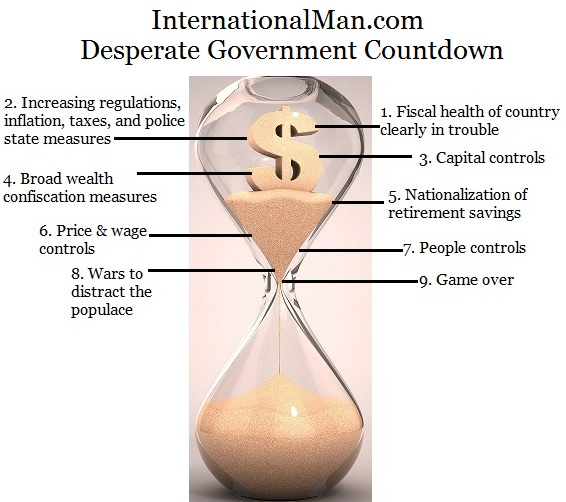 It’s much more difficult for the government to convert your retirement assets if they’re outside of its immediate reach. If you have a standard IRA from a large US financial institution, it would only take a decree from the US government and Poof!: your dividend-paying stocks and corporate bonds could instantly be transformed into government bonds.

Obviously, this is much harder for the government to do if your retirement assets are sufficiently internationalized.

For example, you can structure your IRA to invest in foreign real estate, open an offshore bank or brokerage account, own certain types of physical gold stored abroad, and invest in other foreign and nontraditional assets.

In my view, owning an apartment in Switzerland and some physical gold coins stored in a safe deposit box in Singapore beats the cookie-cutter mutual funds shoved down your throat by traditional IRA custodians any day.

If and when there’s some sort of decree to convert or otherwise confiscate the assets in your retirement account, your internationalized assets ensure that your savings won’t vanish at the stroke of a pen.

There are important details and a couple of restrictions that you’ll need to be aware of, but they amount to minor issues, especially when weighed against the risk of leaving your retirement savings within the immediate reach of a government desperate for cash.

Internationalizing your IRA has always been a prudent and pragmatic thing to do. And now that the US government has now officially set its sights on retirement savings, it’s truly urgent.

You’ll find all the details on how it to get set up, along with trusted professionals who specialize in internationalizing IRAs in our Going Global publication.