– Kyodo: Dumping Fukushima radioactive water is gov’ts only solution — Risk of “damaging effects” from toxic discharges — Even if fully implemented, around 300 tons of contaminated groundwater will still flow into Pacific every day (VIDEO) (ENENews, Feb 4, 2014):

Xinhua, Feb. 3, 2014: [A]ccording to the central government here, and the International Atomic Energy Agency (IAEA), TEPCO is struggling to contain massive influxes of contaminated water on a daily basis and must now weigh the risks of dumping excess radioactive water into ocean. […] Juan Carlos Lentijo, head of the IAEA’s mission floated the idea of releasing radioactive water into the ocean when on a recent mission to the stricken facility […] Lentijo added that TEPCO should weigh the possible damaging effects of discharging toxic water against the total risks involved in the overall decommissioning work process. […] “You cannot keep storing the water forever. We have to make choice comparing all risks involved,” [Shunichi Tanaka, chairman of Japan’s Nuclear Regulation Authority] said. 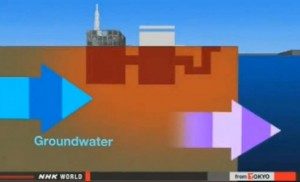 Wall St. Journal, Feb. 4, 2014: When implemented the [pumping] system is expected to cut the daily flow of contaminated water to as low as 290 tons compared with 400 tons now.

Kyodo News, Feb. 3, 2014: The groundwater will be pumped out before it mingles with the highly radioactive water accumulating and leaking from the cracked basements of the flooded reactor buildings […] filtration systems [are] unable to keep pace and storage space rapidly running out – dumping appears to be the government’s only solution until it can build a giant experimental freezer around the complex expected to take two years.

NHK, Feb. 3, 2014: Senior vice economy and industry minister Kazuyoshi Akaba met Chairman Hiroshi Kishi of the National Federation of Fisheries Cooperative Associations on Monday. […] Akaba […] said the government will release information to the public to prevent harmful rumors. After the meeting, Kishi said he acknowledges the need for the bypass plan, but it can’t move ahead without the understanding of local fishermen. He also said he plans to make a final decision after carefully examining how the bypass process will be monitored, and measures to prevent harmful rumors.