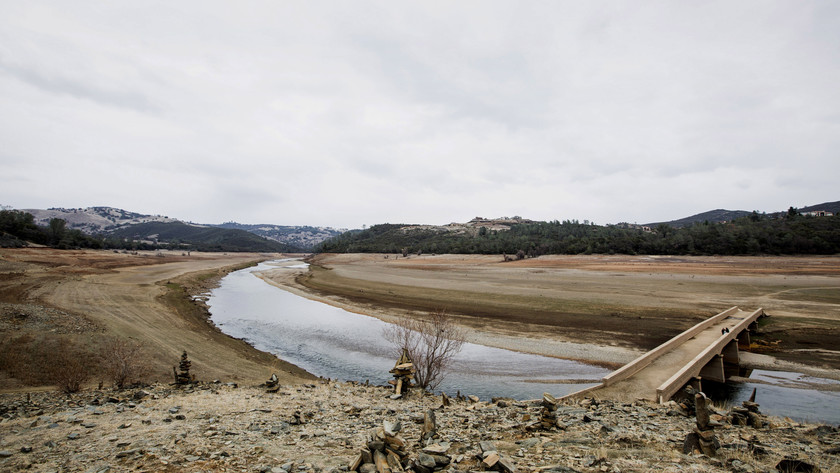 Cities and institutions across California are resorting to exceptional measures to deal with a worsening drought, from mandatory water restrictions in beachside Santa Cruz to voluntary cutbacks in Los Angeles.Santa Cruz, which relies on rainfall rather than mountain runoff or imported water, won’t permit residents to drain and refill swimming pools or hot tubs and has barred restaurants from serving water unless specifically requested.The Metropolitan Water District, the Los Angeles-based utility for 19 million people in Southern California, is asking customers to voluntarily reduce water use by 20 percent. Hearst Castle, one of the state’s top tourist attractions, is getting about one-sixth of its usual water from mountain springs and is diverting resources from its outdoor swimming pools to irrigate 137 acres of gardens and grounds.“People do know about this and are becoming convinced that there’s a statewide crisis,” said Tim Quinn, executive director of the Association of California Water Agencies. “The biggest thing with calling it ‘mandatory’ is that it sounds worse than ‘voluntary.’ The people of California are well down that path already.”About two-thirds of California is gripped by “severe” or “exceptional” drought, the most severe conditions, according to the U.S. Drought Monitor, a federal website. Nine percent of the state — all in the San Joaquin Valley — is considered exceptionally dry, according to the website, which is updated weekly. It’s the state’s most severe drought since at least 1977, according to Jeffrey Kightlinger, general manager of the Metropolitan Water District.

With California’s snowpack at just 12 percent of the average for this period, the state Water Resources Department said Jan. 31 that it was allocating no water from the Sacramento-San Joaquin River Delta to local water agencies, the first time in state history. Snowmelt and rain feeding the delta makes it the single largest source for California’s 38 million residents and 25.4 million acres of farmland.Even before the announcement, many California water agencies had asked consumers to cut use by 5 percent to 50 percent by not watering lawns with sprinklers overnight, sweeping rather than washing driveways and other pavement, taking shorter showers and flushing toilets less frequently. A few cities have already imposed mandatory restrictions, according to the Association of California Water Agencies, whose members supply 90 percent of the state’s water.California Bottling Co. in Roseville has seen a surge in orders for bottled water from a global beverage company, said the company’s owner, Marc Thomas. The customer, his company’s largest, boosted orders to 200,000 cases, about 30 percent more than what it usually buys this time of year, Thomas said.

The customer, which Thomas declined to name, made similar increases for March and April in anticipation that the drought will increase what is already peak demand during spring and summer, he said.“If you were to look at my warehouse right now, we are stocked to the gills,” Thomas said.Thomas said he’s been told by a government official that a worst-case scenario for his company would be that he may have to pay a drought surcharge on some of the water he purchases from municipalities for bottling. If that happens, Thomas said he would pay the tax to meet his customers’ orders.Santa Cruz, a community of 62,000 known for its boardwalk amusement park about 75 miles south of San Francisco, forbids residents from watering lawns and gardens between 10 a.m. and 5 p.m. and bars restaurants from serving water unless asked. The measures are expected to reduce consumption by 5 percent, according to the city’s website.

So far, 843 households and businesses have been cited for violations, said Eileen Cross, a city spokeswoman. Most have been warnings, with about two dozen fines assessed against violators, she said.Santa Cruz is particularly vulnerable to shortages because it doesn’t tap the state Water Resources Department or other external sources, Cross said.In the Sierra Nevada foothills, the Tuolomne Utilities District, which serves about 44,000 people, is enforcing restrictions intended to reduce water use by half, according to a statement. Residents can’t wash vehicles, driveways or sidewalks by hose, and aren’t allowed to water lawns between noon and 7 p.m.Since the rainy season began in September, the district has received 3 inches of precipitation compared with 18 inches in a typical season, according to the statement.

Hearst Castle, a 165-room National Landmark mansion built by publisher William Randolph Hearst during the mid-20th century, is receiving 47,000 gallons of water daily from its mountain springs, compared with a norm of 285,000 gallons, said Jim Allen, a spokesman for the state park that manages the property.Park officials are no longer planting annual flowers and other plants and are diverting water from outdoor pools to irrigate the grounds, Allen said by telephone.“We’re looking at more serious conservation measures,” he said. “We’re experiencing a severe drought situation.”Few parts of Southern California, home to most of the state’s population, have been hit with mandatory conservation orders. The Metropolitan Water District, which supplies half of the state’s population, has about 2.4 million acre-feet of water in storage and another 600,000 acre-feet available for emergencies such as earthquakes, said Bob Muir, a spokesman. The district sells about 1.7 million acre-feet of water a year, according to a fact sheet. An acre-foot is the volume needed to cover an acre of land one foot deep with water.“Despite the dry conditions, we don’t plan to implement water restrictions on our member agencies,” Muir said.