“Today there is a tremendous amount of monetary distortion, on par with the 1929 stock market and certainly the peak of 2007, and many others,” warns Universa’s Mark Spitznagel. 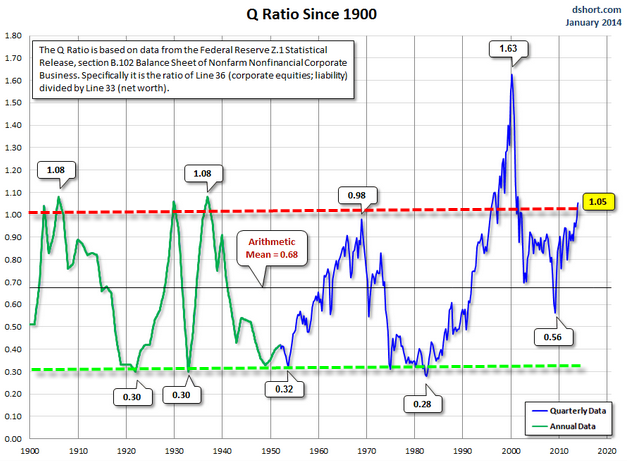 At these levels, he suggests (as The Dao of Capital author previously told Maria B, “subsequent large stock market losses and even crashes become perfectly expected events.” 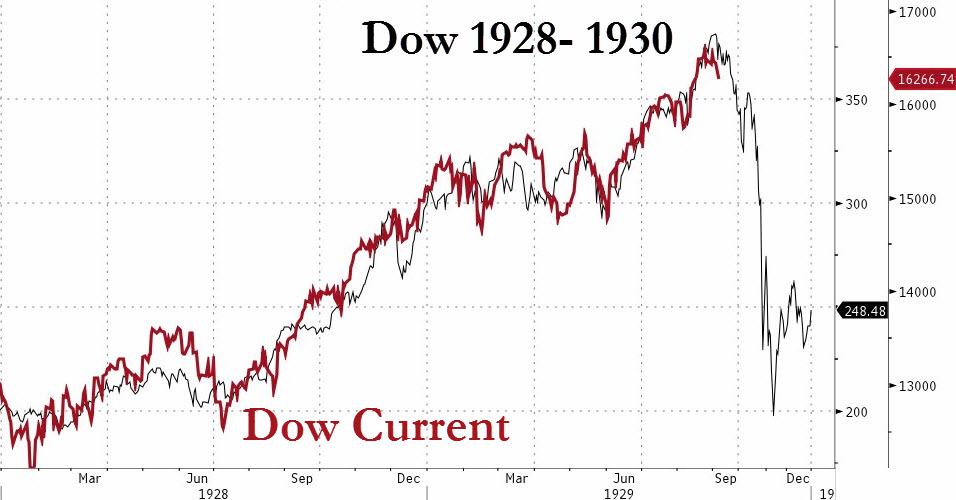 Post-Bernanke it will be more of the same, he adds, and investors need to know how to navigate such a world full of “monetary distortions in the economy and the creation of malinvestments.” The reality is, Spitznagel concludes that the ‘recovery is a Fed distortion-driven mirage‘ and the only way out is to let the natural homeostasis take over – “the purge that occurs after massive distortion is painful, but ultimately, it’s far better and healthier for the system.”

On the “recovery” in the United States…

Spitznagel: The somewhat improved economic activity that we’re seeing is based on a mirage—that is, the illusion created by artificial zero-interest rates.

When central banks lower interest rates in hopes of stimulating the economy, that intervention is not the same as a natural move in interest rates.

A genuine drop in interest rates is in response to an increase in savings, as consumers defer consumption now in order to consume later. In a high-savings environment, entrepreneurs put their capital to work to become more roundabout,1 layering their tools and intermediate stages of production to become increasingly productive. The time to make these investments is when consumers are saving, so that entrepreneurs can be in an even better position to make the products that consumers want, when they want them.

In an artificial rate environment, however, that’s not what’s happening. Instead of consumers saving now to spend later, they are spending now.

But because interest rates are artificially lower, entrepreneurs are being fooled into investing in something now that they will have to back out of later—building up what the Austrians call “malinvestment.” Therefore, the illusion is unsustainable, by definition. The Fed can’t keep interest rates low forever.

From an investor perspective, people are trying to extract as much as they can right now. Consider the naïve dividend investment argument: “I can’t afford to be in cash right now.” Investment managers have to provide returns today.

Whenever investors sell a low dividend-paying stock to buy a higher-dividend stock, some piece of progress is sapped from our economy. (The cash needed to pay that higher dividend isn’t going to capital investment in the company.)

This is the exact opposite of entrepreneurial thinking that advances the economy. Consider the example of Henry Ford, who didn’t care about paying dividends today. He wanted to plow as much capital as possible back into making production more efficient for the benefit of the consumer who would pay less for a higher-quality product.

In summary, a major message of my recent book, The Dao of Capital, is recognizing the distortions that come from central bank intervention. Because of the Fed’s actions, interest rates are no longer a real piece of economic information. If you treat them like they are, you will simply do the wrong thing.

After all, when the government tries to manipulate things, the inverse of what was intended usually happens. On that point, history is entirely on my side.

On The Government & Federal Reserve’s “Interventions”…

Spitznagel: The reality is, when distortion is created, the only way out is to let the natural homeostasis take over. The purge that occurs after massive distortion is painful, but ultimately, it’s far better and healthier for the system. While that may sound rather heartless, it’s actually the best and least destructive in the long run.

Look what happened in the 1930s, when the actions of the government prolonged what should have been a quick purge. Instead, the government prevented the natural rebuilding process from working, which made matters so much worse.

I draw a parallel to forest wildfires. Fire suppression prevents small, naturally occurring wildfires from error-correcting the inappropriate growth, and thus prevents the system from seeking its natural homeostatic balance—its natural temporal structure of production, if you will. Instead, everything is allowed to grow at once, as if more resources exist than actually do, and the forest actually gradually consumes itself. When fire inevitably does break out, it is catastrophic. This is a perfect analogy for the market process. We simply do not understand the great homeostasis at work in markets that are allowed to correct their mistakes.

Suppression that makes the cure that much worse than the initial ill, until exponentially more damage is done, calls to mind the wry observation made by the great Austrian economist Ludwig von Mises: “If a man has been hurt by being run over by an automobile, it is no remedy to let the car go back over him in the [opposite] direction.”

As the Mises protégé Murray Rothbard would say, the catharsis needed to return to homeostatic balance “is the ‘recovery’ process,” and, “far from being an evil scourge, is the necessary and beneficial return” to healthier growth and “optimum efficiency.”

It is unfair to call the Austrians heartless because of these views. The Keynesians are the ones who got us into this mess in the first place—just like those who advocated for the suppression of natural forest fires are the ones who created the tinder box that puts the forest at risk.

On The Yellen Fed… (hint – no change)

Spitznagel: Post-Bernanke it will be more of the same. Therefore, investors need to know how to navigate a distorted world—and post-Bernanke the world is likely to get even more distorted—until the markets, ultimately and inevitably, flush out that distortion. This is why I rely on the Austrian school so much.

Austrian business cycle theory (ABCT) shows us what is really happening behind the curtain, so to speak, from monetary distortions in the economy and the creation of malinvestment. When the economy is subject to top-down intervention from the government and especially the central bank, investors need to read the signs in order to protect themselves—as well as still find a way to own productive assets.

People can avoid becoming trapped into chasing immediate returns along with the rest of the ill-fated crowd.

A far better approach is to wait for the return to homeostasis that will prevail even in the midst of pervasive distortion. In that way, investors can embrace roundabout investing by avoiding the distortion and, thus, have all the more resources later for opportunistic investing.

On investing (for retail inevstors)…

Another option for investors is a very simplistic, “mom-and-pop” strategy that starts with recognizing when you are in a distorted environment. For this I use what I call the Misesian stationarity index, which describes the amount of distortion in the economy.

This simple, back-of-the-envelope strategy would be to buy when the index is low and sell when it is high. In other words, people should stay out of the market when it is distorted and thus preserve their capital to deploy after the inevitable purge and correction, when productive assets become bargain-priced. Such an approach has resulted historically in an annualized 2-percent outperformance of stocks. Logically it makes sense, and when you look at it empirically, it’s incontrovertible.

Yet, admittedly, in the world of investing, sitting with one’s arms folded and not taking advantage of a rising market pumped up with distortion, is difficult—even though avoiding the enticement leads to better intermediate means for positional advantage to be exploited later.

It is difficult to do and may even feel anticlimactic. Nonetheless, the disciplined Misesian approach is healthier for one’s portfolio.

On the worst case scenario…

the Fed keeps winning and the illusion continues. The equity markets keep ripping along.

This ratio has tremendous meaning from an Austrian standpoint, as it reflects what the markets are saying about the state of distortion in the economy.

This aptly illustrates Mises’s concept of “stationarity.” (In a stationary economy, in the aggregate, balance is achieved between the return and replacement costs.) The farther the ratio moves above “1,” the more monetary distortion there is in the economy. For this reason, and as a tip of the hat to the man who gave us the Austrian business cycle theory, I call this ratio the Misesian stationarity index, or MS index for short. When the MS index is high, subsequent large stock market losses and even crashes become perfectly expected events.

Today there is a tremendous amount of monetary distortion, on par with the 1929 stock market and certainly the peak of 2007, and many others (except the 2000 peak, which got a bit more ahead of itself). And all were caused by monetary distortion. As the Austrians show us, the business cycle is a Fed-induced phenomenon.