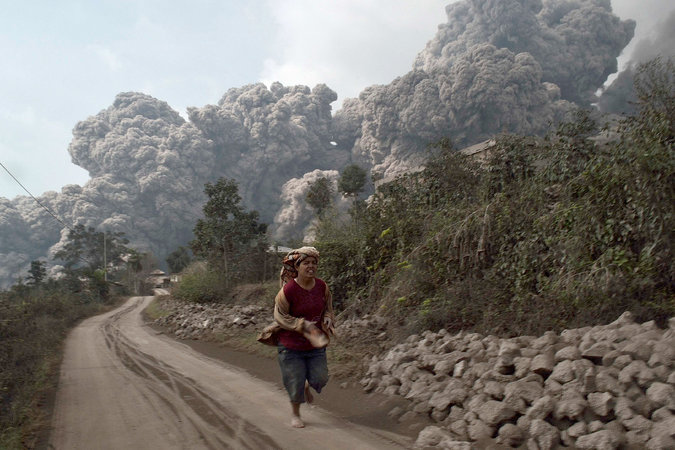 Among the dead on Mount Sinabung were a local television journalist and four high-school students and their teacher who were visiting the mountain to see the eruptions up close, said a spokesman for the National Disaster Mitigation Agency, Sutopo Purwo Nugroho. At least three other people were injured, and the authorities said they feared that the death toll would rise.

Mount Sinabung in western Sumatra has been erupting for four months, sending lava, searing gas and rocks rolling down its southern slopes. The authorities had evacuated more than 30,000 people, housing them in cramped tents, schools and public buildings. Many have been desperate to return to check on homes and farms, presenting a quandary for the government.

On Friday, the authorities allowed nearly 14,000 people living outside a three-mile danger zone to return home after volcanic activity decreased. Others living close to the peak have been returning to their homes over the past four months despite the dangers.

On Saturday, a series of huge blasts and eruptions thundered from the 8,530-foot-high volcano, sending lava and pyroclastic flows up to 2.8 miles away, Mr. Nugroho said. Television reports showed villages, farms and trees around the volcano covered in thick gray ash.

After the eruption, all those who had been allowed to return home on Friday were ordered back into evacuation centers.

“The death toll is likely to rise as many people are reported still missing and the darkness hampered our rescue efforts,” said Lt. Col. Asep Sukarna, who led the rescue operation.

The latest eruptions came a week after President Susilo Bambang Yudhoyono visited displaced villagers and pledged to relocate them to new plots with permanent housing.

The volcano’s last major eruption in August 2010 killed two people and forced 30,000 others to flee. It caught many scientists off guard because the volcano had been quiet for four centuries.