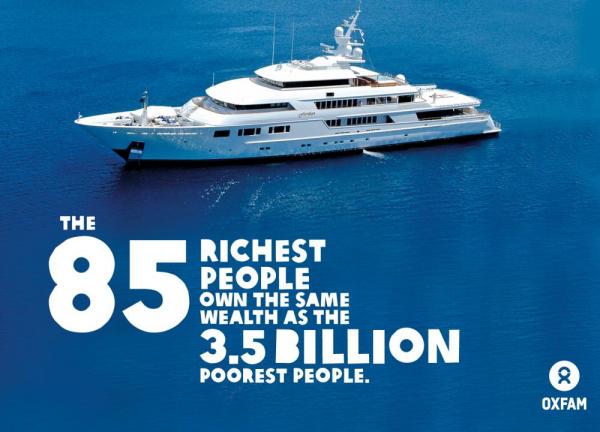 There is something morbidly gruesome and ironic in having the world’s wealthiest people, among them the presidents and central bank heads of the world’s most “advanced” nations, as well as the CEOs of the biggest corporations, sitting down in Davos – a place where the press passes alone cost thousands of dollars – and discussing global inequality: the same inequality that their policies and principles are responsible for. It is even more morbid when one considers that according to a recent Oxfam report, one that will be used in Davos itself, the disparity in wealth between the haves and the have nots has reached absolutely record proportions, surpassing any previous inequality gaps seen before and during the Great Depression.

Which brings us to the topic of wealth.

By now everyone is familiar with the popular wealth pyramid, which shows that “29 million, or 0.6% of those with any actual assets under their name, own $87.4 trillion, or 39.3% of all global assets.“ 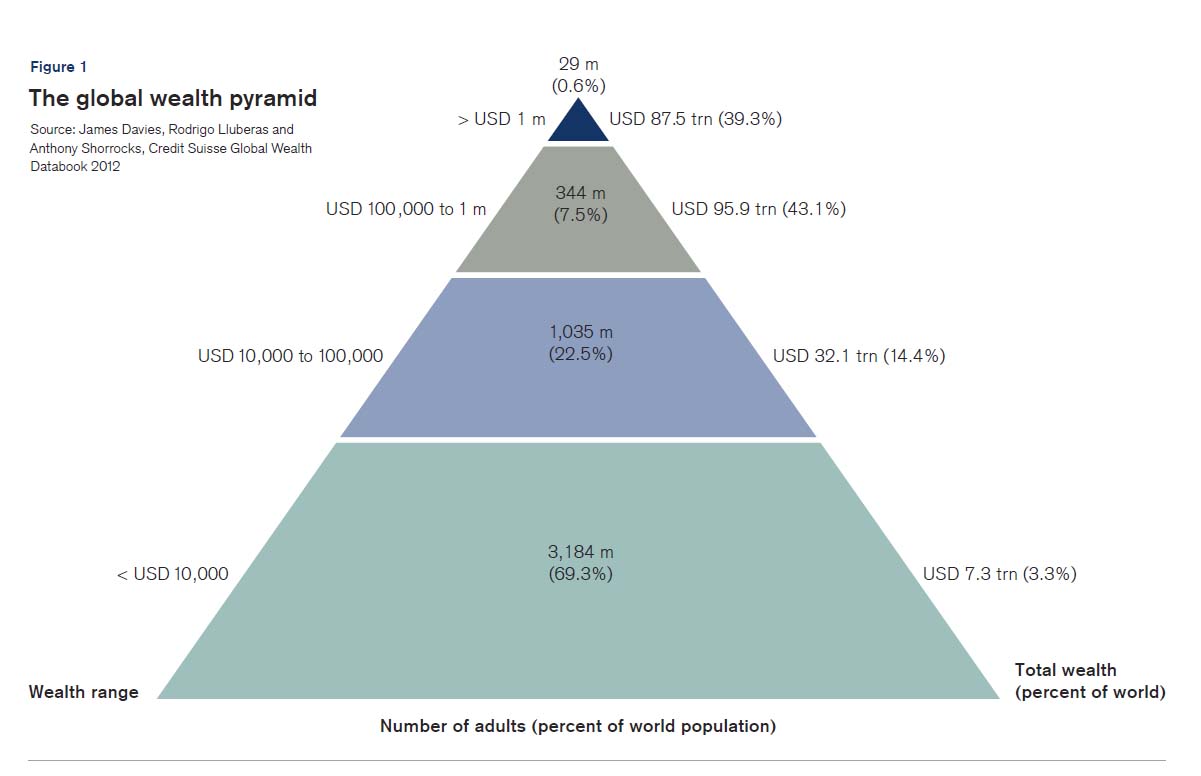 One can extend that rule of thumb to say that almost half of the world’s wealth is now owned by just one percent of the population, and seven out of ten people live in countries where economic inequality has increased in the last 30 years.

However, for the best visual of the disparity between the haves and the have nots we go to Oxfam once more, which just penned the soundbite of the day, and possibly, of the week for suddenly very bleeding-heart Davos:

That’s right: “the 85 richest people own the same wealth as the 3.5 billion poorest people” … aka half the world’s population.

Naturally this should come as no surprise: after all the past 5 years of this website have been, more than anything, a testament to the systematic theft, plunder and pillage of the global middle class by a small cabal of global financial oligarchs – those who have implicit control of the printing presses, who have the legal and legislative support of a few, actually make that all, corrupt and purchased politicians, who have merely made this wealth transfer from the poor, not so poor and modestly wealthy to the wealthiest, possible.

And not only possible, but the most rapid it has ever been in history.

The chart below from OxFam summarizes the unprecedented speed of wealth transfer going to the richest 1% courtesy of Bernanke et al’s theft-enabling, and Congress-approved policies. 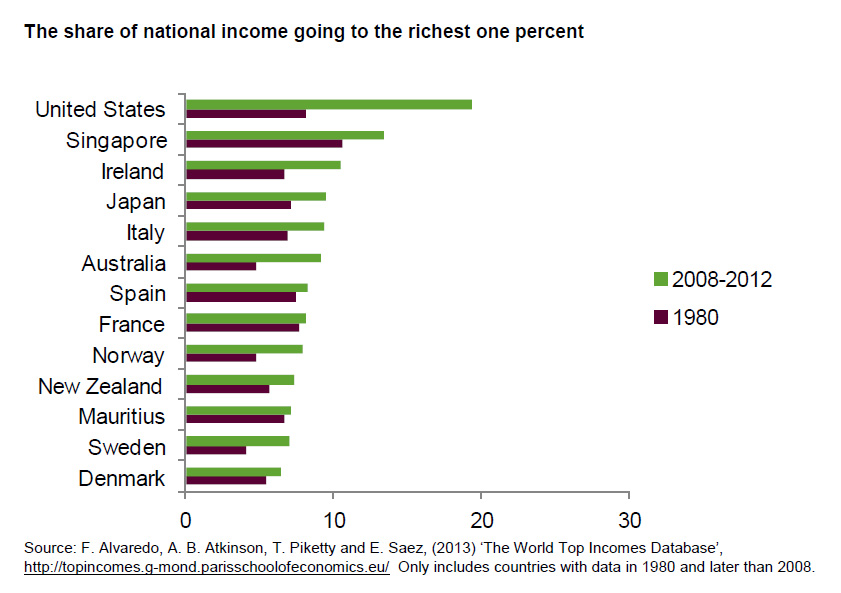 Some of the findings by Oxfam:

Given the scale of rising wealth concentrations, opportunity capture and unequal political representation are a serious and worrying trend. For instance:

Oxfam’s conclusions should be perfectly known in advance by anyone who has been following said systematic wealth plunder over the years:

Some economic inequality is essential to drive growth and progress, rewarding those with talent, hard earned skills, and the ambition to innovate and take entrepreneurial risks. However, the extreme levels of wealth concentration occurring today threaten to exclude hundreds of millions of people from realizing the benefits of their talents and hard work.

Extreme economic inequality is damaging and worrying for many reasons: it is morally questionable; it can have negative impacts on economic growth and poverty reduction; and it can multiply social problems. It compounds other inequalities, such as those between women and men. In many countries, extreme economic inequality is worrying because of the pernicious impact that wealth concentrations can have on equal political representation. When wealth captures government policymaking, the rules bend to favor the rich, often to the detriment of everyone else. The consequences include the erosion of democratic governance, the pulling apart of social cohesion, and the vanishing of equal opportunities for all. Unless bold political solutions are instituted to curb the influence of wealth on politics, governments will work for the interests of the rich, while economic and political inequalities continue to rise. As US Supreme Court Justice Louis Brandeis famously said, ‘We may have democracy, or we may have wealth concentrated in the hands of the few, but we cannot have both.’

Oxfam is concerned that, left unchecked, the effects are potentially immutable, and will lead to ‘opportunity capture’ – in which the lowest tax rates, the best education, and the best healthcare are claimed by the children of the rich. This creates dynamic and mutually reinforcing cycles of advantage that are transmitted across generations.

It is this threat of a global revolution that suddenly has the panties of all the Davos participants in a bunch: because regardless of the amounts of cholesterol consumed over the past 5 years of epic wealth transfer, we are confident all of these individuals recall well what happened in France in 1789.

This also means that these unbelievably wealthy men and women will suddenly sit down and fight to undo all the legalized theft they have engaged in since the Lehman collapse, and instead fight for the common man…. The same common man, who would be shot on sight if seen walking through one of Davos’ marble halls without credentials, by the specially trained army of guards protecting the world’s if not best, then certainly wealthiest.

And just who are these kind-hearted Robin Hoods, who will gladly take from themselves and give to the poor? Here, courtesy of RanSquawk, is a very partial list of the people the world’s poor should pray to tonight (and every other night):

President and Prime Ministers from the G20 countries who will address the Meeting include:

Some of the leading public figures who will be participating in the 2014 Annual Meeting are:

Some of the leading business figures who will be participating in the 2014 Annual Meeting are:

Our advice to the disenfranchised and the poor around the globe hoping that any of the people listed above will do much if anything to help their plight: it will get worse… before it gets much worse.