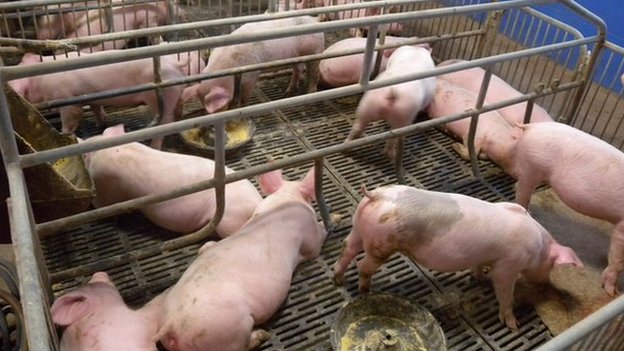 The technology involved is not particularly novel – but what is new is the application of mass production.

The first shed contains 90 animals in two long rows. They look perfectly normal, as one would expect, but each of them is carrying cloned embryos. Many are clones themselves.

This place produces an astonishing 500 cloned pigs a year: China is exploiting science on an industrial scale.

To my surprise, we’re taken to see how the work is done. A room next to the pens serves as a surgery and a sow is under anaesthetic, lying on her back on an operating table. An oxygen mask is fitted over her snout and she’s breathing steadily. Blue plastic bags cover her trotters.

Two technicians have inserted a fibre-optic probe to locate the sow’s uterus. A third retrieves a small test-tube from a fridge: these are the blastocysts, early stage embryos prepared in a lab. In a moment, they will be implanted.

The room is not air-conditioned; nor is it particularly clean. Flies buzz around the pig’s head.

My first thought is that the operation is being conducted with an air of total routine. Even the presence of a foreign television crew seems to make little difference. The animal is comfortable but there’s no sensitivity about how we might react, let alone what animal rights campaigners might make of it all.

I check the figures: the team can do two implantations a day. The success rate is about 70-80%.

Dusk is falling as we’re shown into another shed where new-born piglets are lying close to their mothers to suckle. Heat lamps keep the room warm. Some of the animals are clones of clones. Most have been genetically modified.

The point of the work is to use pigs to test out new medicines. Because they are so similar genetically to humans, pigs can serve as useful “models”. So modifying their genes to give them traits can aid that process.

One batch of particularly small pigs has had a growth gene removed – they stopped growing at the age of one. Others have had their DNA tinkered with to try to make them more susceptible to Alzheimer’s.

Back at the company headquarters, a line of technicians is hunched over microscopes. This is a BGI innovation: replacing expensive machines with people. It’s called “handmade cloning” and is designed to make everything quicker and easier.

The scientist in charge, Dr Yutao Du, explains the technique in a way that leaves me reeling.

“We can do cloning on a very large scale,” she tells me, “30-50 people together doing cloning so that we can make a cloning factory here.”

A cloning factory – an incredible notion borrowed straight from science fiction. But here in Shenzhen, in what was an old shoe factory, this rising power is creating a new industry.

In neighbouring buildings, there are rows of gene sequencers – machines the size of fridges operating 24 hours a day crunching through the codes for life.

To illustrate the scale of this operation, Europe’s largest gene sequencing centre is the Wellcome Trust Sanger Institute near Cambridge. It has 30 machines. BGI has 156 and has even bought an American company that makes them.

BGI’s chief executive, Wang Jun, tells me how they need the technology to develop ever faster and cheaper ways of reading genes.

Again, a comparison for scale: a recently-launched UK project seeks to sequence 10,000 human genomes. BGI has ambitions to sequence the genomes of a million people, a million animals and a million plants.

Wang Jun is keen to stress that all this work must be relevant to ordinary people through better healthcare or tastier food. The BGI canteen is used as a testbed for some of the products from the labs: everything from grouper twice the normal size, to pigs, to yoghurt.

I ask Wang Jun how he chooses what to sequence. After the shock of hearing the phrase “cloning factory”, out comes another bombshell:

“If it tastes good you should sequence it,” he tells me. “You should know what’s in the genes of that species.”

Species that taste good is one criterion. Another he cites is that of industrial use – raising yields, for example, or benefits for healthcare.

“A third category is if it looks cute – anything that looks cute: panda, polar bear, penguin, you should really sequence it – it’s like digitalising all the wonderful species,” he explains.

I wonder how he feels about acquiring such power to take control of nature but he immediately contradicts me.

“No, we’re following Nature – there are lots of people dying from hunger and protein supply so we have to think about ways of dealing with that, for example exploring the potential of rice as a species,” the BGI chief counters.

China is on a trajectory that will see it emerging as a giant of science: it has a robotic rover on the Moon, it holds the honour of having the world’s fastest supercomputer and BGI offers a glimpse of what industrial scale could bring to the future of biology.