– Japan TV: It gets worse every minute at Fukushima plant, groundwater mixing with melted fuel — Gundersen: There’s no end in sight because the nuclear core is in contact with groundwater (VIDEO) (ENENews, Jan 17, 2014):

Interview with nuclear expert Arnie Gundersen of Fairewinds Energy Education, Power Hour, Jan. 16, 2014 (at 58:00 in): What makes Fukushima different than Chernobyl and TMI […] they were essentially stopped in less than a year. We’re at 3 years ¬and there’s no end in sight. The reason is that the nuclear core is in contact with the groundwater and that’s bad, and that’s going to be bad for years to come. 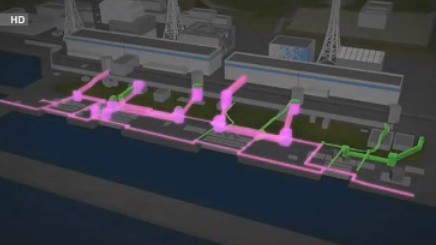 NHK Nuclear Watch, Jan. 16, 2014: An issue that gets worse with every passing minute […] the build-up of contaminated water. […] Lake Barrett, Tepco advisor: “Water is a continuing challenge, control of the contaminated water is a very complex matter. It’s a very complicated site with groundwater movements.” Groundwater becomes tainted hour after hour at the plant. It seeps into the damaged reactor buildings and mixes with melted fuel. […]

2 thoughts on “Japan TV: It gets worse every minute at Fukushima plant, groundwater mixing with melted fuel — Arnie Gundersen: There’s no end in sight because the nuclear core is in contact with groundwater”