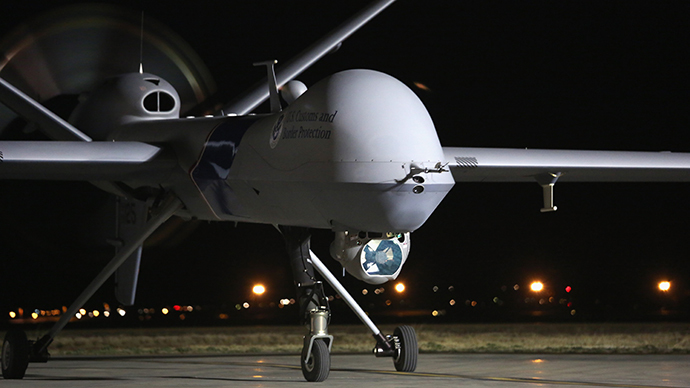 A Predator drone operated by U.S. Office of Air and Marine

President Barack Obama said last May that control of the United States’ weaponized drone program would shift away from the Central Intelligence Agency and into the hands of the Pentagon, but a new report suggests Congress could keep that from happening.

According to a front-page article on this Thursday’s edition of the Washington Post, members of the US House and Senate appropriations committee have in total secrecy been spearheading efforts to ensure that a classified provision pertaining to America’s drone war is included in the latest government spending bill. Should those lawmakers be successful in their attempt, Pres. Obama’s stated intentions with regards to America’s controversial drone program could effectively be quashed and control over an arsenal of robotic killing machines would stay within the CIA’s jurisdictions.

Greg Miller, an intelligence reporter for the Post, wrote that the provision is buried within a classified annex included in the contents of a $1.1 trillion funding bill unveiled late Monday in Congress that would divvy up spending among federal programs across the board. Now according to Miller’s sources, a secret provision would stall Pres. Obama’s attempts to overhaul America’s use of weaponized drones to fight suspected terrorists overseas.

Miller wrote that Monday’s bill does not touch on any changes to the drone program in its publically available contents, though one section that explains spending for the Pentagon notes: “adjustments to classified programs are addressed in the accompanying classified annex.”

Spokespeople for the White House, the CIA and the Pentagon all declined to comment to the Post, Miller wrote, but sources speaking on condition of anonymity confirmed to the paper that the measure would restrict the use of any federal monies towards transferring control over the drone program to the Department of Defense.

During his address at the Defense University in DC last May, the president said he wanted his drone program to be more transparent. That same week he signed a classified presidential policy guidance, and one senior administration official who spoke at the time with Gannet’s Defense News said, “there’s an indication of a preference for the Department of Defense to engage in the use of force outside of war zones.”

As recently as this week, though, a drone strikes reportedly waged in Yemen by the Pentagon, not the CIA, killed an innocent farmer. Last month, a similar strike conducted by the Department of Defense took the lives at least six civilians.

Those latest incidents have only increased doubts among lawmakers that the DoD is as capable of the CIA when it comes to conducting drone strikes without causing multiple civilian casualties. But even if the CIA ultimately maintains control of those operations, not all agree with some lawmakers’ attempt to do so under the table.

Hours after the Post published their report, Sen. John McCain (R-Arizona) erupted on the floor of the Senate over allegations that his colleagues are covertly trying to keep the president’s plans with regards to the drone program from coming into fruition.

“The Appropriations Committee has no business making these decisions,” the senator insisted.

“The appropriations have gotten into the business of the authorizing committees,” McCain added. “That is a violation of every procedure and process that this Senate is supposed to be pursuing.”