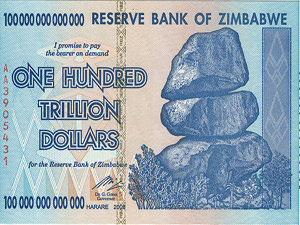 – We Will Be Told Hyperinflation is Necessary, Proper, Patriotic, and Ethical (Ludwig von Mises Institute, Jan 13, 2014):

Hyperinflation leads to the complete breakdown in the demand for a currency, which means simply that no one wishes to hold it. Everyone wants to get rid of that kind of money as fast as possible. Prices, denominated in the hyper-inflated currency, suddenly and dramatically go through the roof. The most famous examples, although there are many others, are Germany in the early 1920s and Zimbabwe just a few years ago. German Reichsmarks and Zim dollars were printed in million and even trillion unit denominations.

We may scoff at such insanity and assume that America could never suffer from such an event. We are modern. We know too much. Our monetary leaders are wise and have unprecedented power to prevent such an awful outcome.

Our monetary leaders do not understand the true nature of money and banking; thus, they advocate monetary expansion as the cure for every economic ill. The multiple quantitative easing programs perfectly illustrate this mindset. Furthermore, our monetary leaders actually advocate a steady increase in the price level, what is popularly known as inflation. Any perceived reduction in the inflation rate is seen as a potentially dangerous deflationary trend, which must be countered by an increase in the money supply, a reduction in interest rates, and/or quantitative easing. So an increase in inflation will be viewed as success, which must be built upon to ensure that it continues. This mindset will prevail even when inflation runs at extremely high rates.

Like previous hyperinflations throughout time, the actions that produce an American hyperinflation will be seen as necessary, proper, patriotic, and ethical; just as they were seen by the monetary authorities in Weimar Germany and modern Zimbabwe. Neither the German nor the Zimbabwean monetary authorities were willing to admit that there was any alternative to their inflationist policies. The same will happen in America.

The most likely trigger to hyperinflation is an increase in prices following a loss of confidence in the dollar overseas and its repatriation to our shores. Committed to a low interest rate policy, our monetary authorities will dismiss the only legitimate option to printing more money — allowing interest rates to rise. Only the noninflationary investment by the public in government bonds would prevent a rise in the price level, but such an action would trigger a recession. This necessary and inevitable event will be vehemently opposed by our government, just as it has been for several years to this date.

Instead, the government will demand and the Fed will acquiesce in even further expansions to the money supply via direct purchases of these government bonds, formerly held by our overseas trading partners. This will produce even higher levels of inflation, of course. Then, in order to prevent the loss of purchasing power by politically connected groups, the government will print even more money to fund special payouts to these groups. For example, government will demand that Social Security beneficiaries get their automatic increases; likewise for the quarter of the population getting disability benefits. Military and government employee pay will be increased. Funding for government cost-plus contracts will ratchet up. As the dollar drops in value overseas, local purchases by our overextended military will cost more in dollar terms (as the dollar buys fewer units of the local currencies), necessitating an emergency increase in funding. Of course, such action is necessary, proper, patriotic, and ethical.

Other federal employee sectors like air traffic controllers and the TSA workers will likely threaten to go on strike and block access to air terminal gates unless they get a pay increase to restore the purchasing power of their now meager salaries.

State and local governments will also be under stress to increase the pay of their public safety workers or suffer strikes which would threaten social chaos. Not having the ability to increase taxes or print their own money, the federal government will be asked to step in and print more money to placate the police and firemen. Doing so will be seen as necessary, proper, patriotic, and ethical.

Each round of money printing eventually feeds back into the price system, creating demand for another round of money printing … and another … and another, with each successive increase larger than the previous one, as is the nature of foolishly trying to restore money’s purchasing power with even more money. The law of diminishing marginal utility applies to money as it does to all goods and services. The political and social pressure to print more money to prevent a loss of purchasing power by the politically connected and government workers will be seen as absolutely necessary, proper, patriotic, and ethical.

Many will not survive. Just as in Weimar Germany, the elderly who are retired on the fruits of a lifetime of savings will find themselves impoverished to the point of despair. Suicides among the elderly will be common. Prostitution will increase, as one’s body becomes the only saleable resource for many. Guns will disappear from gun shops, if not through panic buying then by outright theft by armed gangs, many of whom may be your previously law-abiding neighbors.

Businesses will be vilified for raising prices. Goods will disappear from the market as producer revenue lags behind the increase in the cost of replacement resources. Government’s knee-jerk solution is to impose wage and price controls, which simply drive the remaining goods and services from the white market to the gangster-controlled black market. Some will sit out the insanity. Better to build inventory than sell it at a loss. Better still to close up shop and wait out the insanity. So government does the necessary, proper, patriotic, and ethical thing: it prints even more money and prices increase still more.

The money you have become accustomed to using and saving eventually becomes worthless; it no longer serves as a medium of exchange. No one will accept it. Yet the government continues to print it in ever greater quantities and attempts to force the citizens to accept it. Our military forces overseas cannot purchase food or electrical power with their now worthless dollars. They become a real danger to the local inhabitants, most of whom are unarmed. The US takes emergency steps to evacuate dependents back to the States. It even considers abandoning our bases and equipment and evacuating our uniformed troops when previously friendly allies turn hostile.

And yet the central bank continues to print money. Politically-connected constituents demand that it do so, and it is seen as the absolutely necessary, proper, patriotic, and ethical thing to do.

1 thought on “We Will Be Told Hyperinflation Is Necessary, Proper, Patriotic, And Ethical”