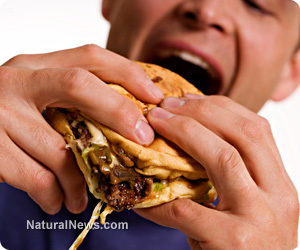 According to a new study by researchers at the University of New South Wales in Australia, eating food that is loaded with sugar and fat for just one week can have a detrimental effect on the brain’s cognitive ability. More worrying still, preliminary data suggests that this effect is permanent, indicating that junk food is even more toxic than we can possibly imagine.

For the study, the Australian researchers – who were interested in clarifying the relationship between high-energy diets and impaired cognition – fed rats a “cafeteria diet” over a one-month period. This diet was comprised of rat food supplemented with cakes, biscuits, lard and a 10 percent sucrose solution. A control group, subsisting on rat food without supplementation, was also monitored throughout the same period.

The researchers found that the rats on the junk food diet experienced noticeable cognitive impairment within a very short time frame. Much of this impairment related to place recognition, with the animals demonstrating a reduced ability to notice when an object had been moved to a new location. Significantly, the rats also suffered inflammation of the hippocampal region of the brain, which relates to spatial memory.

”We know obesity causes inflammation in the body, but we didn’t realize until recently that it causes changes in the brain,” said Margaret Morris, the head of pharmacology at the university. ”What is so surprising about this research is the speed with which the deterioration of the cognition occurred. […] Our preliminary data also suggests that the damage is not reversed when the rats are switched back to a healthy diet, which is very concerning.”

The researchers did find that certain aspects of the rats’ memories were spared. All of the rats fed a junk food diet, for instance, retained their ability to recognize objects.

”We suspect that these findings may be relevant to people,” she said. ”While nutrition affects the brain at every age, it is critical as we get older and may be important in preventing cognitive decline. An elderly person with poor diet may be more likely to have problems.

”Given that high energy foods can impair the function of the hippocampus, if you eat a lot of them it may contribute to weight gain by interfering with your episodic memory. […] People might be less aware of their internal cues like hunger pangs and knowing when they have had enough.”

The study was funded by the National Health and Medical Research Council of Australia and published in the Brain, Behavior, and Immunity journal in December 2013.