– She Survived Hitler And Wants To Warn America 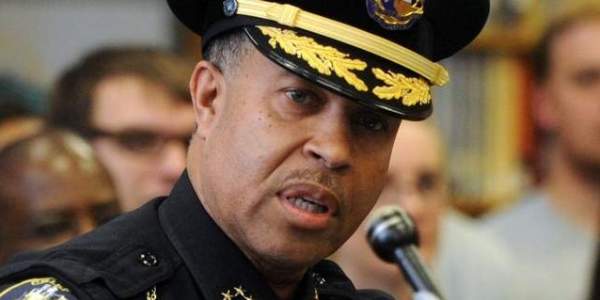 During his 28 years on the police force in Los Angeles, James Craig tended to agree with his state’s tight control over concealed carry permits, believing fewer guns would lead to fewer violent crimes.

But when he moved to Portland, Maine, in 2009 to serve as the city’s new police chief, he discovered a different culture – one where guns actually made people safer.

Now Craig, the chief of police in Detroit, Mich., has a message for the law-abiding folks in his crime-ridden city: Arm yourselves, and criminals will think twice about attacking you.

At a press conference at police headquarters Thursday, the Detroit News reports, Craig praised the deterrent power of a legally armed citizenry.

“When we look at the good community members who have concealed weapons permits,” he said, “the likelihood they’ll shoot is based on a lack of confidence in this Police Department.”

Craig’s statements echoed those he made Dec. 19 on WJR Radio’s “The Paul W. Smith Show”: “There’s a number of [concealed pistol license, or CPL] holders running around the city of Detroit. I think it acts as a deterrent. Good Americans with CPLs translates into crime reduction. I learned that real quick in the state of Maine.”

At the press conference Thursday, Craig described his conversion from gun hater to gun advocate.

“Coming from California, where it takes an act of Congress to get a concealed weapon permit, I got to Maine, where they give out lots of [carrying concealed weapon permits, or CCWs], and I had a stack of CCW permits I was denying; that was my orientation,” he said. “I changed my orientation real quick. Maine is one of the safest places in America. Clearly, suspects knew that good Americans were armed.”

“I think at its core, his position is an emotional one, based on the idea that people feel safer when they have guns. But studies have shown more guns don’t deter crime,” Thomas told the News. “There’s no research that shows guns make anyone safer, and it does show that, the more guns in any situation, the higher the likelihood of them harming either the owner, or people who have access to them.”

“The purpose of the present study is to determine the effects of state-level assault weapons bans and concealed weapons laws on state-level murder rates. Using data for the period 1980 to 2009,” writes Gius, “the results of the present study suggest that states with restrictions on the carrying of concealed weapons had higher gun-related murder rates than other states. It was also found that assault weapons bans did not significantly affect murder rates at the state level.

“These results suggest that restrictive concealed weapons laws may cause an increase in gun-related murders at the state level,” Gius concludes. “The results of this study are consistent with some prior research in this area, most notably Lott and Mustard (1997).”

Rick Ector of the Firearm Academy of Detroit, which teaches gun safety classes, told the Detroit News Craig’s comments are unusual for a police official.

“It’s a huge, radical departure for the police chief to say good people should have access to firearms,” said Ector. “I’m not ready to say he’s pro-gun just yet, but it’s vastly different from what police chiefs have said in the past.”

The News further reports, “Although Craig said more responsible gun owners would likely lower crime, in the past he also has called for a ban on assault weapons, regulating high-capacity magazines, tighter restrictions on Internet ammunition sales and more stringent background checks for merchants who sell firearms at gun shows.”

Craig has also spoken up on the controversial practice of “stop and frisk,” advocating its use and claiming it’s not racist – as some critics charge – when the city is 85 percent black.

1 thought on “Detroit Police Chief To Citizens: Arm Yourselves”