– Gundersen: All of Japan is contaminated, gov’t covering up enormous exposures to public; Epidemic is just beginning — Evacuee: We are in fact dying in Fukushima; What happened to us will soon affect all Japanese people (VIDEOS) (ENENews, Dec 16, 2013):

Arnie Gundersen, Chief Engineer at Fairewinds, Dec. 16, 2013: The Japanese parliament has just passed the state secrets law. It’s really an information ‘iron curtain’ that’s preventing people in Japan from learning just how bad the exposures were that they received after the accident at Fukushima. […] They’re trying to underestimate the amount of radiation that the Japanese received […] I think they’re neglecting some really serious sources of radiation in their effort to convince the Japanese people that nuclear power is safe. […] These exposures not being calculated by the Japanese, or the IAEA, are in fact enormous. [..] Fukushima was 3 times worse than Chernobyl as far as the noble gases [e.g. xenon, krypton] that were released. […] There’s already a 10-fold increase in thyroid issues in Japan and we’re just at the beginning of the thyroid epidemic. […] As I discovered when I was in Tokyo during the book tour during 2012, all of Japan is a radiologically contaminated area, and the people in Japan need to take extraordinary precautions. The net effect of all this is the total exposure to the Japanese is being grossly underestimated. >> Watch the video here 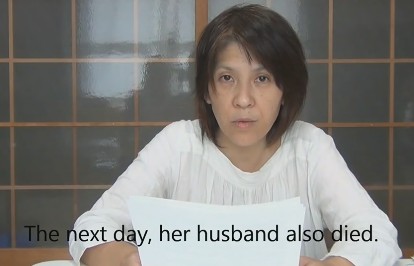 Testimony of a Fukushima Evacuee, Oct. 30, 2013 — Miko from Iwaki City (at 7:00 in): What the state announces is different from the reality. […] As I just told you what the media says and the facts are entirely different.  […] What happened to Fukushima residents will soon affect all Japanese people […] While some say the radiation has dispersed, we are now safe people are in fact dying in Fukushima. One day a nephew of my friend died of Leukemia. The next day her husband also died. […] There are people living in Fuksuhima, now, they all say: “We’re guinea pigs after all […] many people are dying, huh? There’s nothing we can do, it’s useless, so why bother? I’d rather focus on happy things” and continue with their decontamination. […] People refuse to face the fact that these will eventually come back to haunt them. >> Watch all of Miko’s testimony here

2 thoughts on “Arnie Gundersen: All Of Japan Is Contaminated, Gov’t Covering Up Enormous Exposures To Public; Epidemic Is Just Beginning – Evacuee: We Are In Fact Dying In Fukushima; What Happened To Us Will Soon Affect All Japanese People”