– General Electric Knew Its Reactor Design Was Unsafe … So Why Isn’t GE Getting Any Heat for Fukushima? (Washington’s Blog, Dec 11, 2013):

5 of the 6 nuclear reactors at Fukushima are General Electric Mark 1 reactors.

GE knew decades ago that the design was faulty.

Thirty-five years ago, Dale G. Bridenbaugh and two of his colleagues at General Electric resigned from their jobs after becoming increasingly convinced that the nuclear reactor design they were reviewing — the Mark 1 — was so flawed it could lead to a devastating accident.

Questions persisted for decades about the ability of the Mark 1 to handle the immense pressures that would result if the reactor lost cooling power, and today that design is being put to the ultimate test in Japan. Five of the six reactors at the Fukushima Daiichi plant, which has been wracked since Friday’s earthquake with explosions and radiation leaks, are Mark 1s.

“The problems we identified in 1975 were that, in doing the design of the containment, they did not take into account the dynamic loads that could be experienced with a loss of coolant,” Bridenbaugh told ABC News in an interview. “The impact loads the containment would receive by this very rapid release of energy could tear the containment apart and create an uncontrolled release.”

Still, concerns about the Mark 1 design have resurfaced occasionally in the years since Bridenbaugh came forward. In 1986, for instance, Harold Denton, then the director of NRC’s Office of Nuclear Reactor Regulation, spoke critically about the design during an industry conference.

“I don’t have the same warm feeling about GE containment that I do about the larger dry containments,” he said, according to a report at the time that was referenced Tuesday in The Washington Post.

When asked if [the remedial measures performed on the Fukushima reactors by GE before 2011] was sufficient, he paused. “What I would say is, the Mark 1 is still a little more susceptible to an accident that would result in a loss of containment.”

The New York Times reported that other government officials warned about the dangers inherent in GE’s Mark 1 design:

In 1972, Stephen H. Hanauer, then a safety official with the Atomic Energy Commission, recommended that the Mark 1 system be discontinued because it presented unacceptable safety risks. Among the concerns cited was the smaller containment design, which was more susceptible to explosion and rupture from a buildup in hydrogen — a situation that may have unfolded at the Fukushima Daiichi plant. Later that same year, Joseph Hendrie, who would later become chairman of the Nuclear Regulatory Commission, a successor agency to the atomic commission, said the idea of a ban on such systems was attractive. But the technology had been so widely accepted by the industry and regulatory officials, he said, that “reversal of this hallowed policy, particularly at this time, could well be the end of nuclear power.”

This faulty design has made the Fukushima disaster much worse.

In addition, the Mark 1 included an absolutely insane design element: storing huge quantities of radioactive fuel rods 100 feet up in the air.

A particular feature of the 40-year old General Electric Mark 1 Boiling Water Reactor model – such as the six reactors at the Fukushima site – is that each reactor has a separate spent-fuel pool. These sit near the top of each reactor and adjacent to it ….

As we noted last year, the spent fuel pool at Fukushima reactor number 3 is in a heap of rubble (spent fuel pool designated as “SFP”  in the lower left): 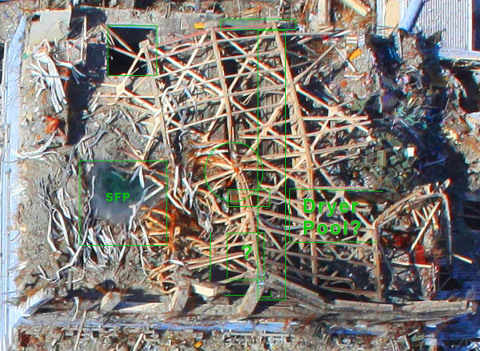 Nuclear fuel rod expert Gundersen says the pool at unit 3 is in much worse shape than at 4:

Unit 3 is worse [than No. 4]. Mechanically its rubble, the pool is rubble. It’s got less fuel in it [than unit 4, but] structurally the pool has been dramatically weakened. And, god nobody has even gotten near it yet.

He’s right. It’s too radioactive for Tepco to even get a look at what’s going on in the reactor pools at units 1 through 3, and they have no idea how to do it. Indeed, the technology does not even exist to approach those reactors, as the high radiation levels quickly destroy even robots.

Postscript:  Unfortunately, there are 23 virtually-identical GE Mark 1 reactors in the U.S.

This is not to say that Tepco and the Japanese government are not to blame also.  Theyare.

But GE and the American government are largely responsible as well.