– Meanwhile, Russia Casually Announces It Will Use Nukes If Attacked (ZeroHedge, Dec 11, 2013):

With the Ukraine situation increasingly precarious, and now even the US state department getting involved with the occasional unexpected harsh warning…

… into what Putin has made very clear is his brand new sphere of influence (it is unclear just why the US is responding in such a way: did the pro-Europe protesters not use Made in the US tear gas or chemical weapons?), Russia casually threw it out there earlier today that it would use nuclear weapons if it comes under an attack. As vice prime minister and defense industry chief made clear, “One can experiment as long as one wishes by deploying non-nuclear warheads on strategic missile carriers. But one should keep in mind that if there is an attack against us, we will certainly resort to using nuclear weapons in certain situations to defend our territory and state interests.” Just in case it wasn’t quite clear… 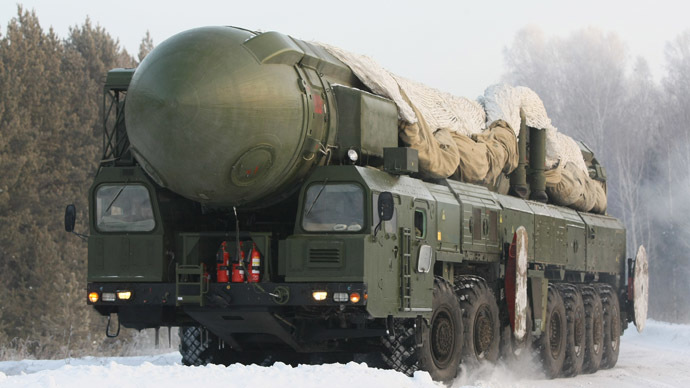 Rogozin pointed out that this principle is enshrined in Russia’s military doctrine. Any aggressor or group of aggressors should be aware of that, he said. “We have never diminished the importance of nuclear weapons – the weapon of requital – as the great balancer of chances,” Rogozin said.

So far, the FPI has already looked at over a thousand proposed ideas and plans to work on 60 projects, eight of which are top priority, the politician said. He refused to disclose any details, but said that one of those projects is focused on preparing a response to the PGS, which is the “main strategy” that the Pentagon is nurturing.

PGS would allow the United States to strike targets anywhere on the planet, with conventional weapons in as little as an hour.

As Rogozin explained earlier, the strategy would give America an advantage over a nuclear state, thanks to their better technical capabilities with weaponry, including the speed, RIA Novosti cited.

So if nothing else, at least the primary deterrence strategy of the cold war has just made a roaring comeback. We can only hope that with such skilled heads of the State Department as John Kerry, that the nuclear exchange that was avoided for the duration of the first cold war doesn’t somehow become a GDP-boosting reality.