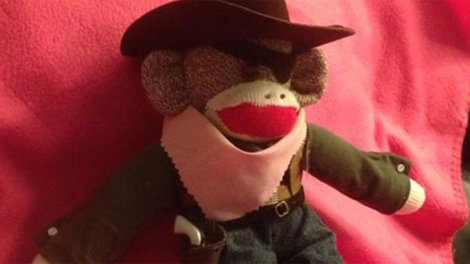 “Rooster Monkburn” the cowboy sock monkey is without his pistol, thanks to a diligent TSA agent in St. Louis.

Phyllis May of Redmond, Wash. says she is “appalled and shocked and embarrassed all at the same time” about the incident that happened on Dec. 3.

May has a small business selling unique sock monkey dolls. She says she and her husband were on their way from St. Louis to Sea-Tac and she had a couple of monkeys and sewing supplies with her in a carry-on bag.

“His pistol was in there,” she says of the sock monkey “Rooster Monkburn,” a take-off on John Wayne character “Rooster Cogburn” from the film “True Grit.”

May and her husband were going through the screening process when she noticed that one of her bags was missing.

May said the TSA agent went through the bag, through the sewing supplies and found the two-inch long pistol.

The TSA agent told May she would have to confiscate the tiny gun and was supposed to call the police.

“I said well go ahead,” said May. “And I said really? You’re kidding me right, and she said no it looks like a gun.”

“She took my monkey’s gun,” said May, who has retained her sense of humor.

“Rooster Monkburn has been disarmed so I’m sure everyone on the plane was safe,” she said. “I understand she was doing her job but at some point doesn’t common sense prevail?”

In the end, the agent did not call police and May did get her other sewing supplies back.

On Monday, the TSA issued a statement, saying “TSA officers are dedicated to keeping the nation’s transportation security systems safe and secure for the traveling public. Under longstanding aircraft security policy, and out of an abundance of caution, realistic replicas of firearms are prohibited in carry-on bags.”