While much has been said about the benefits of Bernanke’s wealth effect to the asset-owning “10%”, just as much has been said about the ever deteriorating plight of the remaining debt-owning 90%, who are forced to resort to labor to provide for their families, and more specifically how their living condition has deteriorated over not only the past five years, since the start of the Fed’s great experiment, but over the past several decades as well. However, in the case of America’s “servant” class, Al Jazeera finds that their plight is now worse than it has been at any time over the past century, going back all the way to 1910! 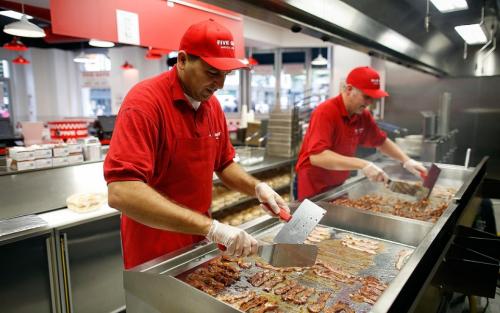 According to Al Jazeera, “at least one class of American workers is having a much harder time today than a decade ago, than during the Great Depression and than a century ago: servants. The reason for this, surprisingly enough, is outsourcing. Let me explain. Prosperous American families have adopted the same approach to wages for servants as big successful companies, hiring freelance outside contractors for all sorts of functions from child care and handyman chores to gardening and cleaning work to reduce costs. Instead of the live-in servants, who were common in the prosperous households of America before World War II, better off families now outsource the family cook, maid and nanny. It is part of a global problem in developed countries that is getting more attention worldwide than in the U.S.”

The reality is that the modern servant is also known as the minimum-wage burger flipper, whose recent weeks have been spent in valiant, if very much futile, strikes in an attempt to increase the minimum wage their are paid. Futile, because recall that in its first “national hiring day” McDonalds hired 62,000 workers…. and turned down 938,000! Such is the sad reality of the unskilled modern day worker at the bottom the labor pyramid.

Unfortunately, we anticipate many more strikes in the future of America’s disenfranchised poorest, especially once they realize that their conditions are worse even than compared to live in servants from the turn of the century.

Consider the family cook. Many family cooks now work at family restaurants and fast food joints. This means that instead of having to meet a weekly payroll, families can hire a cook only as needed.

A household cook typically earned $10 a week in 1910, century-old books on the etiquette of hiring servants show. That is $235 per week in today’s money, while the federal minimum wage for 40 hours now comes to $290 a week.

More than half of fast food workers are on some form of welfare, labor economists at the University of California, Berkeley and the University of Illinois reported in October after analyzing government economic statistics.

Data on domestic workers is scant because Congress excludes them from both regular data gathering by the Bureau of Labor Statistics and laws giving workers rights to rest periods and collective bargaining.

Nevertheless, what we do know is troubling. These days 60 percent of domestic workers spend half of their income just on housing and a fifth run out of food some time each month.

A German study found that in New York City domestic workers pay ranges broadly, from an illegal $1.43 to $40 an hour, with a quarter of workers earning less than the legal minimum wage. The U.S. median pay for domestic servants was estimated at $10 an hour.

We are falling backwards in America, back to the Gilded Age conditions a century and more ago when a few fortunate souls grew fabulously rich while a quarter of families had to take in paying boarders to make ends meet. Only back then, elites gave their servants a better deal.

Thorstein Veblen, in his classic 1899 book “The Theory of the Leisure Class,” observed that “the need of vicarious leisure, or conspicuous consumption of service, is a dominant incentive to the keeping of servants.” Nowadays, servants are just as important to elites, except that they are conspicuous in their competition to avoid paying servants decent wages.

But… but… how is that possible if the stock market is at all time highs and the wealth is US households just rose by $1.9 trillion in one short quarter. Oh wait, what they meant is “some” households.

And, of course if all else fails, America’s “free” servants, stuck in miserable lives working minimum wage jobs for corporations where the only focus in on shareholder returns and cutting overhead, can volunteer to return to a state of “semi-slavery” (while keeping the iPhones and apps of course, both paid on credit) and become live-in servants for America’s financial oligarchy and the like. We hear the numerous apartments of Wall Street’s CEOs have quite spacious servants’ quarters.