Estimation of Nuclear-Energy Excursion Possibility during Fukushima-1 NPP Accident, CTBTO: Science & Technology, June 2013: [March 15 at Takasaka monitoring station ~250km SW of Fukushima-1] registered levels of radioactive aerosols exceeded the possible ranges of measurements […] The highest values of radioactivity were indicated on March 16. […] iodine-135 (half-life period = 6,6 hour) reached value of 74 Bq/m3, and the ratio of iodine-135/iodine-131 activities reached value of 24 that pointed indicated on “fresh” fission products from the damaged reactors, and also testified to possibility of emerged uncontrollable nuclear reaction. Unfortunately, the data of radioactive noble gases concentrations were not correctly obtained at Takasaka’s station because of too high levels of their content and equipment pollution. […] reinforce or reject the hypothesis of secondary criticality at the Fukushima-1 accident could be possible […]

Sulfur-35 in Southern California, June 2013: […] data in favor of the criticality is given in [5] where the results of the determination of radioactive sulfur-35 in sulfate aerosols and gaseous SO2 in the oceanic air on the Pacific coast in the village of La Jolla, California. This data indicate exposure of sea water to neutrons with fluence 4 x 10^11 neutrons per m2.  Radionuclide sulfur-35 is formed from seawater containing chlorine-35 by neutron irradiation. 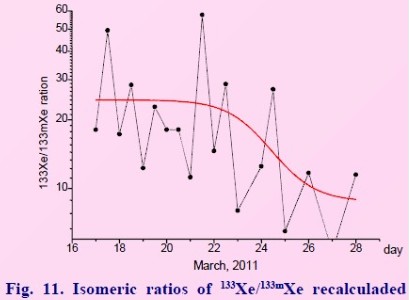 Radioactive Xenon Ratios, June 2013: To verify the hypothesis of emerged uncontrollable nuclear reaction at NPP Fukushima-1 accident, the data was compared with the calculated data characterizing decrease of activity of fission products and changes in isotopes ratio of 133Xe/133mXe and 131mXe/133Xe after automatic shutdown of reactors at the moment of the earthquake. Calculation model considered possibility of «supply» of reactor nuclides with «fresh» products of fission due to emerged criticallity. […] Fig. 10 indicates results of statistical processing of calculated values of dates of shutdowns, calculated using data from [6] and graph on fig. 9. It can be seen, that peak if frequency distribution of these dates corresponds to March 14, which «gets behind» real date, which speaks in favour of criticality hypothesis. Fig. 11 indicates isomer ratios 133Xe/133mXe […] `It can be seen, that values of ratios are in trend to decline from «reactor» value — 36 to value typical for «fresh» products — 10. Therefore, data on Fig. 11 also indicate possibility of emergency emission products supply with “fresh” fission products, i.e. supports a hypothesis of postshutdown criticality.