Jiji Press, Nov. 28, 2013: [Tepco] plans to begin work next month at the earliest to remove large chunks of rubble from a spent fuel pool in the No. 3 reactor building, according to officials. 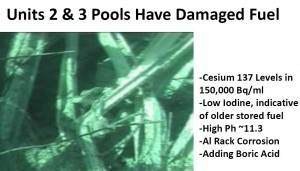 Testimony of Lake Barrett (Now advising Tepco on Fukushima crisis), U.S. House of Representatives, May 13, 2011: Although information is very sketchy, it seems based on water samples taken, there has been damage to spent fuel that is stored in the Units 2 and 3 spent fuel pools. Information as to what happened in these pools is still unavailable, so it is impossible to determine the significance at this time, but it certainly appears that something of significance occurred.

Report to Science Panel (U.S. Congress) by Lake Barrett (Now advising Tepco on Fukushima crisis), March 19, 2011: […] I was writing my summary of the situation, then I could not reconcile conflicting data. The more I dug into the available information the more confusing and contradictory it was. In my putting the pieces together, I discovered that there had been several unreported major explosions in Unit 4 that had happened and also an apparent unreported loss of water in the Unit 3 spent fuel pool. […] It is possible that [Unit 3’s] pool may have overheated resulting in a second explosion here also.