– Gundersen: They want to dump all Fukushima’s radioactive water in Pacific — Tepco: It will be diluted, then released — Professor suggests pumping it out in deep ocean (VIDEOS) (ENENews, Dec 2, 2013):

Interview with Arnie Gundersen, The Real News Network, Dec. 1, 2013: Dale Klein is now suggesting is that we’re just going to take [Fukushima’s radioactive water] and pump it into the Pacific. And I don’t think that’s a very good idea. It’s cheap and it’s fast, it’s the expedient way of doing it, but really there’s something called the London dumping convention. And back in 1972, Greenpeace was very active in preventing radiation from being dumped into the ocean and to my way of thinking, this would violate the London Dumping Convention if they did it. 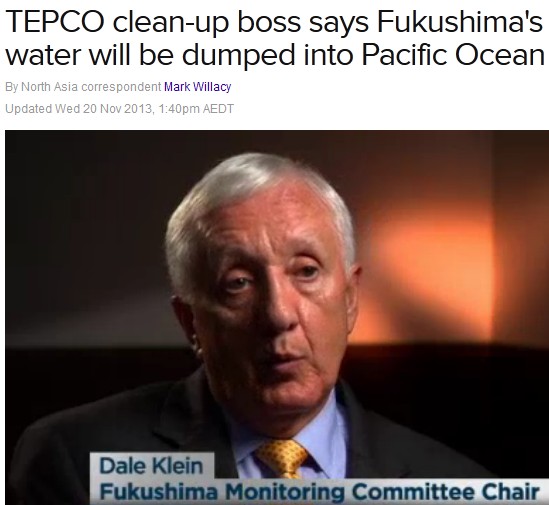 Interview with Tepco adviser Dale Klein, ABC Australia, Nov. 20, 2013: “At the end of the day, when the water is discharged, it will be released in a way that it’s diluted so there’s no risk to public health and safety. But it’s an emotional issue.”

Bloomberg News: [C]onsider pumping effluent below 4,000 meters, said Stony Brook University marine biologist Nicholas Fisher in an interview. […] The International Maritime Organization has prohibited ocean dumping of radioactive material since 1996 […] “There’s certainly much more living stuff in surface waters than there is in deep waters around 4,000 meters,” said Fisher, whose lab has sent scientists on three Fukushima ocean surveys. “There are no fisheries that are based on anything deeper than around 900 meters. If organisms became contaminated down around 4,000 meters, they may not ever appear in surface waters.” […] there is a risk that contamination could spread to larger sea creatures, he said.

Watch the interview with Gundersen here

1 thought on “Arnie Gundersen: They Want To Dump All Fukushima’s Radioactive Water Into The Pacific – Tepco: It Will Be Diluted, Then Released”