– Are Another 1.3 Million Americans About To Drop Out Of Labor Force (And Send Unemployment Plunging)? (ZeroHedge, Dec 2, 2013):

With even the Fed somewhat challenging the credibility of the official unemployment rate – as labor force participation collapses structurally – the possibility that if Congress does not act by Dec 28th, a further 1.3 million people will lose emergency aid and may be deemed ‘out’ of the labor force merely exaggerates an already farcical situation. As JPM’s Mike Feroli notes, the “official” unemployment rate may drop up to 0.8 percentage points, but it won’t mean the economy is any better. Is this the ‘excuse’ the Fed needs to transition from QE to forward guidance (with the public seeing only a rapidly collapsing unemployment rate as evidence of their success) even as the data that they are so “dependent” on becomes worse than useless?

As we warned in November, the only two charts that matter ahead of Friday’s likely distorted nonfarm payrolls report. 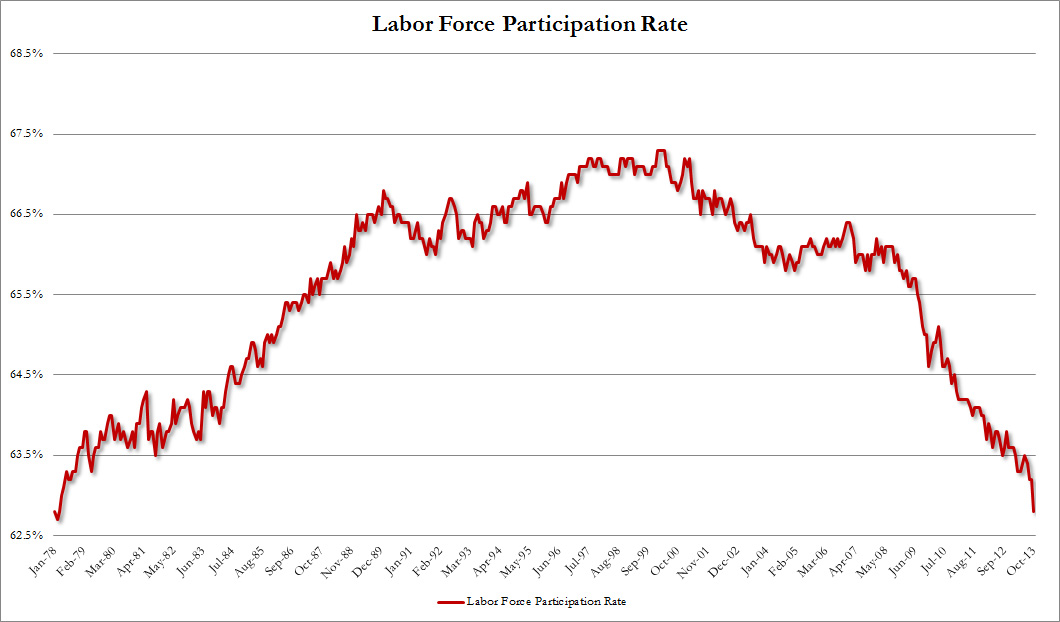 But more importantly, the number of people not in the labor force exploded by nearly 1 million, or 932,000 to be exact, in just the month of October, to a record 91.5 million Americans! This was the third highest monthly increase in people falling out of the labor force in US history. 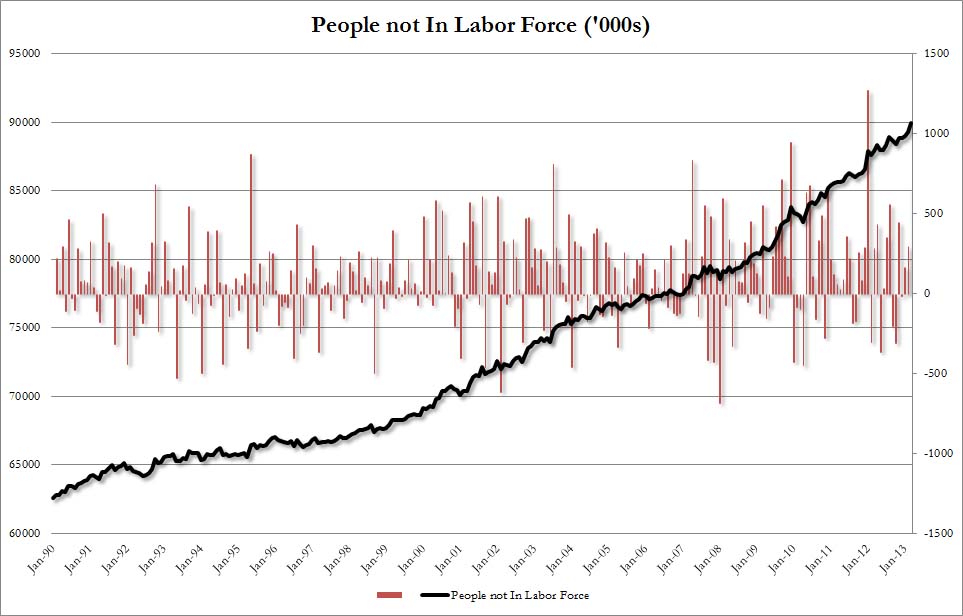 At this pace the people out of the labor force will surpass the working Americans in about 4 years.

And if the Congress does not pass the bill to extend emergency aid – set to expire Dec 28th – then up to 1.3 million more people will be added to that list of 91.5 million already our of the labor force (and another 800,000 more to come in further months)…

JPM’s Feroli: One observation that could set an upper bound on thinking about a participation effect is to hypothesize that all 1.3 million EUC claimants exit the labor force after benefits expire in 1Q (again, should Congress allow that to happen). In that case, the unemployment rate would fall by 0.8%-pt, obviously an extreme example. Some of the Fed studies can help to narrow the range of outcomes.

This will directly impact the Fed’s credibility to manage the economt in a “data-dependent” manner:

JPM’s Feroli: Setting aside the normative aspect of whether from a public policy perspective this is a desirable or undesirable outcome, such a fall in the unemployment and participation rates could create some tricky choices for Fed policymakers as they assess the health of the labor market.

Remember, while consensus is convinced Taper is a positive (the Fed wouldn’t pull back unless everything is golden); we suspect, and today’s Treasury Auction Failure supports that thesis, that the Fed is looking for excuses to Taper (or shift policy away from QE)…

As we have noted numerous times before; the “taper” is all about economic cover for a forced move the Fed has to make:

1. Deficits are shrinking and the Fed has less and less room for its buying

2. Under the surface, various non-mainstream technicalities are breaking in the markets due to the size of the Fed’s position (repo markets, bond specialness, and fail-to-delivers among them).

3. Sentiment is critical; if the public starts to believe (as Kyle Bass warned) that the central bank is monetizing the government’s debt (which it clearly is), then the game accelerates away from them very quickly – and we suspect they fear we are close to that tipping point

4. The rest of the world is not happy. As Canada just noted, the US monetary policy will be discussed at the G-20

Simply put, they are cornered and need to Taper; no matter how bad the macro data and we are sure ‘trends’ and longer-term horizons will come to their rescue in defending the prime dealers’ clear agreement that it is time…