Skyway Global LLC, the St. Petersburg, FL company that owned the DC-9 airline busted in Mexico carrying 5.5 tons of cocaine, made its headquarters in a 79,000 sq ft building owned by Verint Systems (NASDAQ: VRNT), a foreign tele-communications company with a contract to wiretap the U.S. for the NSA through the communication lines of Verizon, which handles  almost half of all landline and cell phone calls in the U.S.

Verint’s founder and CEO, Jacob “Kobi” Alexander, is a former Israeli intelligence officer who is today a fugitive from justice living in Namibia, where he has for several years been fighting extradition to the U.S.

On Verint’s Board of Directors is Lieutenant General Kenneth A. Minihan, former director of the NSA, which has led to speculation that the company today is a joint NSA-Mossad operation.

James Bamford’s 2008 expose of the NSA, “The Shadow Factory, The Ultra-Secret NSA from 9/11 to the Eavesdropping on America,” unearthed disturbing facts about how America’s two major telecom companies, AT & T and Verizon, had outsourced the bugging of their entire networks to what Bamford called “two mysterious companies with very troubling foreign connections.” 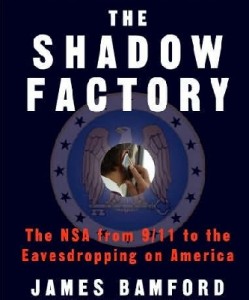 Verint is one of those two “mysterious companies.”

In  “The NSA, Drug Trafficking, & the Crash of Cocaine2,” I reported that I first learned of that Agency’s involvement in drug trafficking in 2000, more than a decade before the super-secret NSA became a household name. The source for that story, Russ Eakin, had been the NSA’s “man on the ground” in Bolivia during the Cocaine Coup in the early 1980’s.

The discovery of previously-undisclosed ties between SkyWay and the NSA came in a review of documents after two men implicated in the drug trafficking network were recently convicted.

Recently Douglas McClain Jr, was sentenced to 14 years for money laundering in Federal Court in San Diego. McClain was the president of Argyll Equities, the dodgy private bank in Texas which purchased the drug-running DC-9 for SkyWay.

Joining McClain in the Big House is  Jonathon Curshen, who got twenty years for fraud and money laundering.  Curshen, an American con man from Sarasota Florida,  controlled a company in Costa Rica called Red Sea Management, which (at least on paper) generously provided— in return for 28,000,000 shares of common stock in SkyWay—the 1966 McDonald Douglas DC9 aircraft that shortly thereafter began carrying cargo which came to include 5.6 tons of cocaine worth several hundred million dollars.

“Some guy in Costa Rica”

“They wrote it up in a press release, touting how they’d just received a big investment from the DuPont Foundation,” explained a former SkyWay executive. “It turned out to be bogus. It was just some guy (Curshen) at a desk in Costa Rica.”

SkyWay’s twisted three-year history of unpunished financial fraud seems relatively well-known at this point.  The company in deliberate fashion stole the life savings of thousands of investors,  through the simple expedient of issuing barrages of press releases filled with utterly false statements to pump up the stock’s price before the company filed for bankruptcy.

SkyWay’s only other overt act of capitalism was its participation in the ownership of a plane hauling 5.5 tons of cocaine worth several hundred million dollars.

But what is known about SkyWay may also illustrate just how much we still don’t know about the NSA.

Musical chairs and the “known unknowns”

It has always struck some observers as odd that a fledgling start-up like SkyWay—with at the time just a few dozen employees—moved in to a huge 79,000 square foot facility in January of 2003, the recently-vacated American headquarters of Tadiran Tele-Communications, which had moved its U.S. operations to New York.

When I first learned of Tadiran, the company didn’t set off any alarm bells.

Now a little probing indicated that the Israeli entity housing itself in Clearwater Florida didn’t call itself “Tadiran” for long. In early 1999, Tadiran’s global surveillance division, housed in Clearwater, was sold to another Israeli telecom, ECI-Telecommunications (Nasdaq: ECTX).

The Israeli Government’s Clearwater-based Surveillance entity (whatever its name-of-the-moment) was finally sold to Verint Systems Inc. in early February 2004.
One possible explanation for the game of musical chairs is that Tadiran’s name had already become tarnished, after the company was accused of being involved in worldwide espionage.
In Guatemala, the company became infamous for having installed two intelligence computers which were reportedly used to select death squad victims, as well as pinpoint urban guerrilla safe houses.

Tadiran also funded an electronics school for the Guatemalan army. At the same time Israel was setting up a factory to manufacture ammunition and replacement parts for Guatemala’s Israeli-made rifles, and advising the Guatemalan military by providing military, counterinsurgency, and intelligence advisers for what human rights groups called a genocidal war which included forced resettlement schemes in the rural highlands against a largely Mayan Indian population.

The DC9 (N900SA) was the first of two drug planes with apparent ties to the U.S. Government caught carrying multi-ton loads of cocaine in Mexico over an 18-month period.  The second, a Gulfstream II business jet (N987SA), was cited by European authorities for flying extraordinary renditions missions for the CIA.

In 2006, during the same year SkyWay’s drug plane was seized, the Bush Administration chose SkyWay landlord-partner-co-conspirator Verint to install a $3 million telephone and Internet wiretapping center in Mexico, allowing authorities there to eavesdrop on every landline and cell phone call made in the country.

“In 2006 the Bush Administration entered into a quiet agreement with the Mexican Government to fund and build an enormous $3 million telephone and Internet eavesdropping vendor that would reach into every town and village in the country,” reported James Bamford.

Telefonos de Mexico (Telmex) is owned by Mexico’s richest man, Carlos Slim Helú, whose own links to the drug trade have been the subject of rumors for years. And with some reason:

When Amado Carrillo Fuentes, known in Mexico as “Lord of the Skies” for his vast armada of planes, died in 1997 while undergoing plastic surgery, he was worth $25 billion, according to the AP.

If you do the math, that means that Drug Lord Amado Fuentes managed to salt away no more than $10 or $15 billion a decade… And HE was in the cocaine business, where counting your money can be a bigger problem than making it.

Yet, according to news reports in 2009, when Slim made a big investment in the New York Times, Slim was now worth between $57 billion and $60 billion dollars. Has anyone in history ever made $50 billion in just ten years?  Did Carlos Slim?  Not by doing anything legal, he didn’t.

Do the math. Mexico’s richest man is dirty.

Bamford discovered a State Department document used to solicit vendors for the system, in which the U. S. was promising to provide Mexico ‘with the capability to intercept, analyze, and use intercepted information from all kinds of communications systems operating in Mexico.”

The communications intercept system, which the U.S. was paying for,  included all necessary hardware, software, and equipment to provide a complete system to intercept, process analyze and store email, internet, chat, landline and cellular, including location and tracking, with the capability to scan millions of telephone calls with voice prints of their targets, to analyze calls and automatically generate links between them to bring under surveillance ever-widening circles of people.

The system the Bush Administration chose for Mexico was similar to the warrantless eavesdropping operation in the U.S. And it used one of the two “mysterious companies with very troubling foreign connections” that Bamford was warning about.

Calderon argued he needed the system and the freedom from court scrutiny to fight drugs and organized crime, many in Mexico, like former Mexico City prosecutor Renato Sales, weren’t buying it. “Suddenly anyone suspected of organized crime is presumed guilty and treated as someone without any constitutional rights. And who will determine who is an organized crime suspect? The State will.”

The vendor for the job, founded by veterans of Israel’s version of the NSA, the hyper-secret Unit 9200, was Verint, the same company that had somehow ended up owning the gleaming facility in Clearwater Florida that the drug traffickers at SkyWay Global called “home.”

Having your own countrywide bugging system to listen in on phone calls made by your indiscreet drug trafficking competitors is probably the very definition of an “unfair competitive advantage. “

Few think that sort of consideration slowed down anyone in this gang.

Data scraped through internet search queries, emails, Smartphone chatter and text messages may be intrusive; but the result may be nothing more serious than a few targeted ads in your browser.

But when the data mining is being done by bent officials from a major NSA contractor with a contract to wiretap and eavesdrop on both the U.S. and across the entire country of Mexico, the results can probably be measured, not in annoying pop-up ads, but in piles of corpses on one side of the road, and piles of heads on the other.