– The UK’s Conservative Party has Erased a Decade Worth of Speeches from the Web (Liberty Blitzkrieg, Nov 13, 2013):

“In the walls of the cubicle there were three orifices. To the right of the speakwrite, a small pneumatic tube for written messages, to the left, a larger one for newspapers; and in the side wall, within easy reach of Winston’s arm, a large oblong slit protected by a wire grating. This last was for the disposal of waste paper. Similar slits existed in thousands or tens of thousands throughout the building, not only in every room but at short intervals in every corridor. For some reason they were nicknamed memory holes. When one knew that any document was due for destruction, or even when one saw a scrap of waste paper lying about, it was an automatic action to lift the flap of the nearest memory hole and drop it in, whereupon it would be whirled away on a current of warm air to the enormous furnaces which were hidden somewhere in the recesses of the building.”
– From George Orwell’s 1984

As many of you will recall, the protagonist in George Orwell’s classic novel 1984 (sales of the book exploded higher this past June following the Snowden revelations) was a man named Winston Smith who worked for the Ministry of Truth. One of his key functions was to revise old newspaper articles in order to make them consistent with the ever changing propaganda intentions of Big Brother.

Apparently 1984 really was an instruction manual, particularly for the Conservative Tory Party in the UK. Incredibly, not only did it go back and delete ten years of speeches from their website, they have taken the extra step to block their access via the Internet Archive. Compete and total desperation has set in across the pond…

¨The party has removed the archive from its public website, erasing records of speeches and press releases from 2000 until May 2010. The effect will be to remove any speeches and articles during the Tories’ modernisation period, including its commitment to spend the same as a Labour government.

In a remarkable step the party has also blocked access to the Internet Archive’s Wayback Machine, a US-based library that captures webpages for future generations, using a software robot that directs search engines not to access the pages.

The Tory plan to conceal the shifting strands of policy by previous leaders may not work. The British Library points out it has been archiving the party’s website since 2004.

Computer Weekly, which broke the story, pointed out that among the speeches removed were several where senior party members promised, if elected, to use the internet to make politicians accountable.

“You have begun the process of democratising the world’s information,“Cameron told the Google Zeitgeist Europe conference in 2006. “By making more information available to more people, you are giving them more power.” That speech has been removed from the Tory party website and the archive. But users can find it on the Guardian website.

Apparently Mr. Cameron has realized that wasn’t such a great idea after all.

“It’s clear to me that political leaders will have to learn to let go,” Cameron told Google a year later, in another removed speech. “Let go of the information that we have guarded so jealously.”

Using a file named “robots.txt”, website owners can tell computers that automatically scan the internet (called “crawlers”) which parts of their sites to access. At the same time as the speeches were removed from the Tory party site, the Conservatives’ robots.txt file was updated to prevent crawlers visiting the pages the speeches had been stored on.

The Internet Archive, which maintains the world’s largest archive of old and defunct webpages, deletes its records of any site blocked by robots.txt. 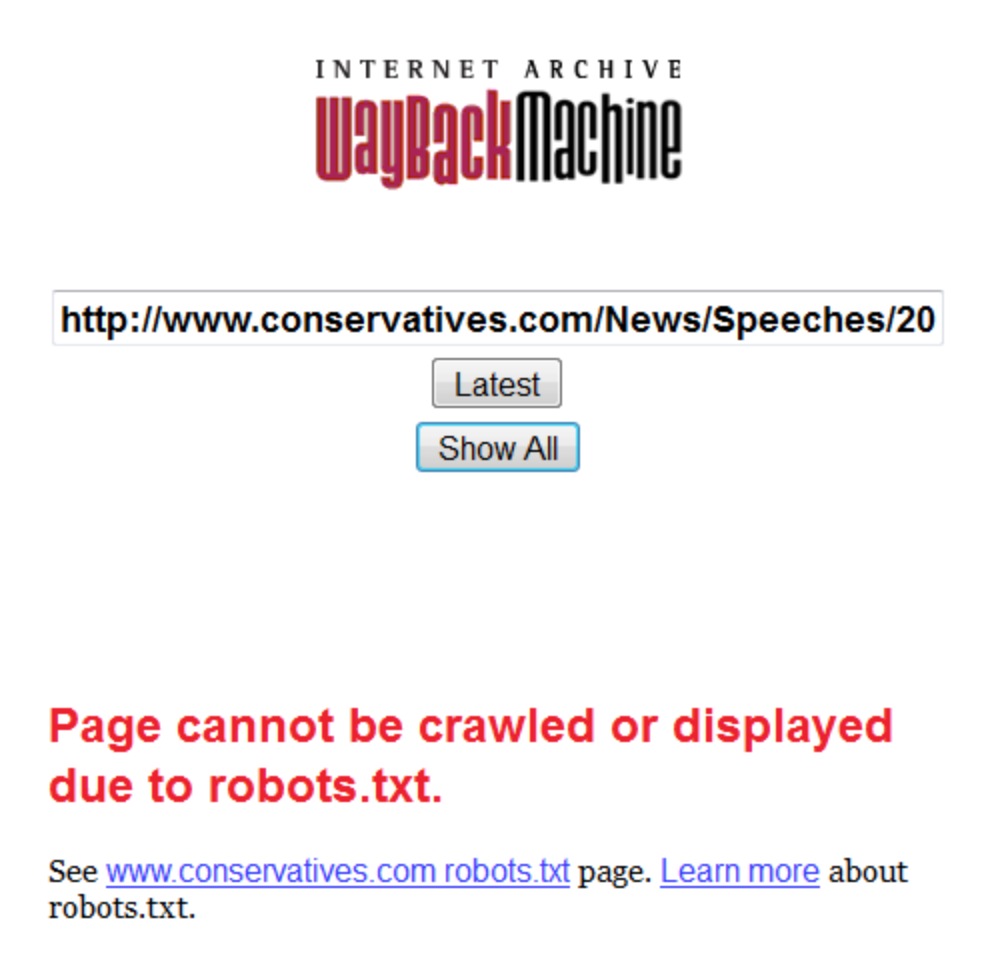 It seems the Streisand Effect is now in play for Cameron. I was never interested in his old speeches before, but now I am. Here are 6 old speeches David Cameron’s people have erased from the web, but Buzzfeed dug up.