A banker named Andrew Huszar that helped manage the Federal Reserve’s quantitative easing program during 2009 and 2010 is publicly apologizing for what he has done.  He says that quantitative easing has accomplished next to nothing for the average person on the street.  Instead, he says that it has been “the greatest backdoor Wall Street bailout of all time.”  And of course the cold, hard economic numbers support what Huszar is saying.  The percentage of working age Americans with a job has not improved at all during the quantitative easing era, and median household income has actually steadily declined during that time frame.  Meanwhile, U.S. stock prices have doubled overall, and the stock prices of the big Wall Street banks have tripled.  So who benefits from quantitative easing?  It doesn’t take a genius to figure it out, and now Andrew Huszar is blowing the whistle on the whole thing.From 2009 to 2010, Huszar was responsible for managing the Fed’s purchase of approximately $1.25 trillion worth of mortgage-backed securities.  At the time, he thought that it was a dream job, but now he is apologizing to the rest of the country for what happened…

I can only say: I’m sorry, America. As a former Federal Reserve official, I was responsible for executing the centerpiece program of the Fed’s first plunge into the bond-buying experiment known as quantitative easing. The central bank continues to spin QE as a tool for helping Main Street. But I’ve come to recognize the program for what it really is: the greatest backdoor Wall Street bailout of all time.

When the first round of quantitative easing ended, Huszar says that it was incredibly obvious that QE had done very little to benefit average Americans but that it had been “an absolute coup for Wall Street”…

Trading for the first round of QE ended on March 31, 2010. The final results confirmed that, while there had been only trivial relief for Main Street, the U.S. central bank’s bond purchases had been an absolute coup for Wall Street. The banks hadn’t just benefited from the lower cost of making loans. They’d also enjoyed huge capital gains on the rising values of their securities holdings and fat commissions from brokering most of the Fed’s QE transactions. Wall Street had experienced its most profitable year ever in 2009, and 2010 was starting off in much the same way.

You’d think the Fed would have finally stopped to question the wisdom of QE. Think again. Only a few months later—after a 14% drop in the U.S. stock market and renewed weakening in the banking sector—the Fed announced a new round of bond buying: QE2. Germany’s finance minister, Wolfgang Schäuble, immediately called the decision “clueless.”

That was when I realized the Fed had lost any remaining ability to think independently from Wall Street.

Having racked up hundreds of billions of dollars in opaque Fed subsidies, U.S. banks have seen their collective stock price triple since March 2009. The biggest ones have only become more of a cartel: 0.2% of them now control more than 70% of the U.S. bank assets.

But Huszar is certainly not the only one on Wall Street that acknowledges these things.  For example, just check out what billionaire hedge fund manager Stanley Druckenmiller told CNBC about quantitative easing…

“This is fantastic for every rich person,” he said Thursday, a day after the Fed’s stunning decision to delay tightening its monetary policy. “This is the biggest redistribution of wealth from the middle class and the poor to the rich ever.”

“Who owns assets—the rich, the billionaires. You think Warren Buffett hates this stuff? You think I hate this stuff? I had a very good day yesterday.”

Druckenmiller, whose net worth is estimated at more than $2 billion, said that the implication of the Fed’s policy is that the rich will spend their wealth and create jobs—essentially betting on “trickle-down economics.”

“I mean, maybe this trickle-down monetary policy that gives money to billionaires and hopefully we go spend it is going to work,” he said. “But it hasn’t worked for five years.”

The American people are still being told that quantitative easing is “economic stimulus” which will make the lives of average Americans better.

That is a flat out lie and the folks over at the Federal Reserve know this.

In fact, a very interesting study conducted for the Bank of England shows that quantitative easing actually increases the gap between the wealthy and the poor…

It said that the Bank of England’s policies of quantitative easing – similar to the Fed’s – had benefited mainly the wealthy.

Specifically, it said that its QE program had boosted the value of stocks and bonds by 26 percent, or about $970 billion. It said that about 40 percent of those gains went to the richest 5 percent of British households.

Many said the BOE’s easing added to social anger and unrest. Dhaval Joshi, of BCA Research wrote that  “QE cash ends up overwhelmingly in profits, thereby exacerbating already extreme income inequality and the consequent social tensions that arise from it.”

And this is exactly what has happened in the United States as well.

U.S. stocks have risen 108% while Barack Obama has been in the White House.

And who owns stocks?

Meanwhile, things have continued to get even tougher for ordinary Americans.

While Obama has been in the White House, the percentage of working age Americans with a job has declined from 60.6% to 58.3%, median household income has declined for five years in a row, and poverty has been absolutely exploding.

But the fact that it has been very good for Wall Street while doing essentially nothing for ordinary Americans is not the biggest problem with quantitative easing.

The biggest problem with quantitative easing is that it is destroying worldwide faith in the U.S. dollar and in the U.S. financial system.

In recent years, the Federal Reserve has started to behave like the Weimar Republic.  Just check out the chart below… 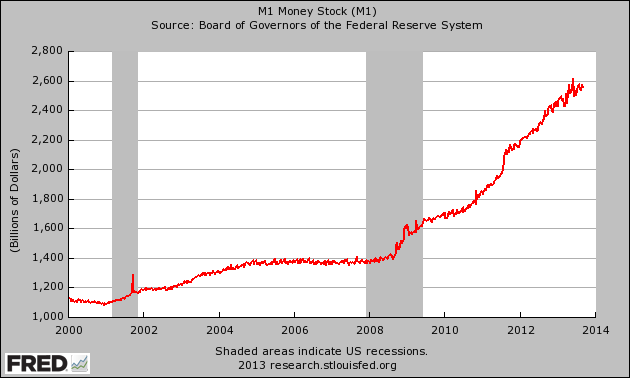 The rest of the world is watching the Fed go crazy, and they are beginning to openly wonder why they should continue to use the U.S. dollar as the de facto reserve currency of the planet.

Right now, most global trade involves the use of U.S. dollars.  In fact, far more U.S. dollars are actually used outside of the United States than are used inside the country.  This creates a tremendous demand for U.S. dollars around the planet, and it keeps the value of the U.S. dollar at a level that is far higher than it otherwise would be.

If the rest of the world decides to start moving away from the U.S. dollar (and this is already starting to happen), then the demand for the U.S. dollar will fall and we will not be able to import oil from the Middle East and cheap plastic trinkets from China so inexpensively anymore.

In addition, major exporting nations such as China and Saudi Arabia end up with giant piles of U.S. dollars due to their trading activities.  Instead of just sitting on all of that cash, they tend to reinvest much of it back into U.S. Treasury securities.  This increases demand for U.S. debt and drives down interest rates.

If the Federal Reserve continues to wildly create money out of thin air with no end in sight, the rest of the world may decide to stop lending us trillions of dollars at ultra-low interest rates.

When we get to that point, it is going to be absolutely disastrous for the U.S. economy and the U.S. financial system.  If you doubt this, just read this article.

If the rest of the globe starts behaving rationally at some point, and they eventually will, then the game will be over.

Let us hope and pray that we still have a bit more time until that happens.