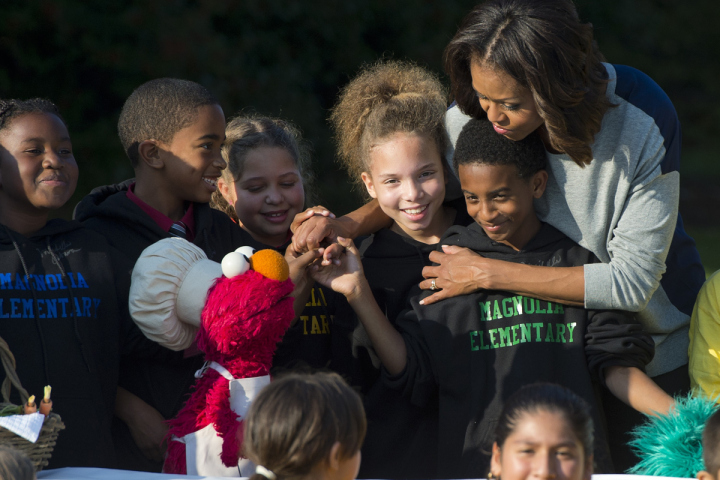 As you dig into your Butterball with all the trimmings this Thanksgiving, remember that millions of famished schoolkids around America may be forced to forgo classic turkey — and chow down instead on vegan black-bean patties and organic locavore quinoa salad.

On Nov. 1, sizable cuts were gouged into the federal food-stamp program (or, as it’s now called, SNAP, Supplemental Nutrition Assistance Program), which feeds 47.6 million people, or nearly one in six Americans. In the city, 1.9 million folks get the bulk of their Jell-O and Campbell’s Soup from stamps.

But news has spread among the poor, like leafy green vegetables, that it wasn’t heartless Republicans who triggered the cuts.

Rather, some of the food-stamp cash was snatched to pay for Michelle Obama’s pet project, Let’s Move. What?

It’s come to this. Some 76 million meals a year will vanish from this city — poof! — partly because the president diverted money from SNAP to the first lady’s signature program, part of her Let’s Move anti-obesity initiative — the bean-sprout-heavy, $4.5 billion Healthy, Hunger-Free Kids Act.

The rest of the $5 billion annual food-stamp cuts was taken when 2009 stimulus funds dried up. But with ObamaCare woes stealing the oxygen in Washington, there’s little urgency to replace dandelion greens served on recyclable trays with family-friendly buttered mashed potatoes.

Right now, the country’s poorest families of four are seeing food-stamp allotments cut from $668 a month to $632. It may not sound like much, but understand that $36 is enough to buy a truckload of Kool-Aid and ramen noodles. (Lose the noodles if the Food and Drug Administration succeeds in banning trans fats.)

How did this happen?

Hunger activists are livid. In fact, the cuts will bring on no less than civil unrest, according to the head of the Food Bank for New York City.

“Well, guess what. No one has restored that money.”

“It is bad policy to take away a child’s dinner and put it in his lunch,” Triada Stampas, director of government relations for the Food Bank, told me.

An administration source told me that the president wants to fund SNAP and healthy lunches in the latest budget, both of which he finds important. But getting it past Congress seems unlikely.

The great food grab began in 2010, when President Obama, with Michelle and US Department of Agriculture honchos at his side, signed the Healthy, Hunger-Free Kids Act. At the time, he admitted taking cash from one pocket to feed the other.

“Some of the funding [for the lunch program] comes from rolling back temporary increases in food-stamp benefits,” he said, starting in the fall of 2013.

“I’m committed to working with [Congress] to restore these funds in the future.”

It proved to be magical thinking.

Part of the problem is that the food-stamp program has grown like wildfire under Obama — to $80 billion last year, with a more than 70 percent increase in recipients just since 2008. Do they all need the help?

Hunger activists have lately rolled out hard-luck cases to the media, like grandmother Katherine McKinnon, who became a single mom of three after her daughter died.

McKinnon was last seen on CNN, walking the streets of New York hunting for cans to sell for a nickel apiece.

“No matter how people look at you, keep your head up,” she said.

Things will get even tighter. The Republican-controlled House wants to cut $39.9 billion over the next ten years from stamps under the farm bill now being negotiated, by eliminating fraud and asking able-bodied recipients to work or join jobs programs.

The Democrat-controlled Senate, which has asked for no such provisions, wants to cut $4.5 billion.

Maybe a good source for food money is the school-lunch program, as kids around the nation rise up against government-approved grub.

One school district’s kids said it “tastes like vomit.”

Ending obesity is a laudable goal. But cardboard lunches should never replace Christmas ham or Hanukkah chicken soup. Stop moving — and sit down.

Justin Bieber is one whorehouse away from an epic meltdown.

The puny pop star, 19, was photographed trying to sneak out of a brothel in Brazil, wrapped in a bed sheet. He also reportedly did the wild thing with a hooker in Panama, and plunked $10,000 in 90 minutes at a Houston jiggle joint, In Touch magazine claimed.

Now Bieber faces vandalism charges in Brazil after allegedly defacing a wall with graffiti. Is the Biebs washed up before he hits 20?

His young fans and their parents won’t stand for this.

Husband from hell John Edwards refuses to take pity on women. The sleazy former North Carolina senator and failed Democratic vice-presidential candidate sired a love child with Rielle Hunter as his wife lay dying of cancer, then threw over Rielle after she wrote a tell-all book.

Now Edwards, 60, has been photographed enjoying a cozy lunch with single mom Danielle King, who, at 35, is a bit more than half his age. The National Enquirer reports she has been Edwards’ secret squeeze for about a year.

Are some gals desperate, or just plain stupid? Or do hormones drown

out the voices in ladies’ heads that say, “Run!”?

Get your kids away from reprobates.

Parents all over the city wonder if it’s healthier to let a kid bully them into buying high-fat grub from McDonald’s.

The little prince chose nothing, then evidently squealed to his mom, who called court-appointed psychologist Marilyn Schiller.

Well, the quack sided with the tot! Schorr alleged in an alarming defamation lawsuit against the shrink. She advised the judge in the Schorrs’ custody case that the bad dad should lose weekend visitation.

I feel sorry for the boy.

He’s learning that whining and emotional manipulation are fine weapons for exacting revenge against warring adults. This can’t continue.

Scheindlin was removed from a case involving the NYPD’s practice of stop, question and frisk by an appeals court panel after she ruled that stop-and-frisk was “indirect racial profiling.” I would say this is direct bias against cops. (The city has moved to vacate Scheindlin’s decision.)

In an editorial Friday, The Times agrees with Scheindlin that she should be returned to the case. And the paper moaned that the Second Circuit Court of Appeals “damaged Judge Scheindlin’s reputation” by kicking her to the curb.

According to the Paper of Record, salving a jurist’s bruised feelings outweighs the public’s right to safe streets.