So much for the surge in 691,000 full-time jobs in September. One short month later, indicating just what a farce the BLS’s sampling process is, while the algo frenzy-inducing establishment survey showed a gain of 204,000 workers, the household survey had some other ideas. True, the headline household survey number rose by an almost identical 213,000 workers, however it is when trying to foot that number into the actual components, when one gets a headache. Because according to the same survey, a whopping 623,000 full-time workers (supposedly government) lost their jobs in October, nearly offsetting the entire 691,000 gain the month before which it turns out was purely for Obamacare (now hopelessly damaged) optics.Ok, so to add up to the headline number at least part-time jobs should have soared right? Wrong. Because according to the BLS another 127K part-time jobs were lost in the month, for a total of 750K full- and part-time losses. In other words, the BLS’ random number generator was working on overdrive once again. 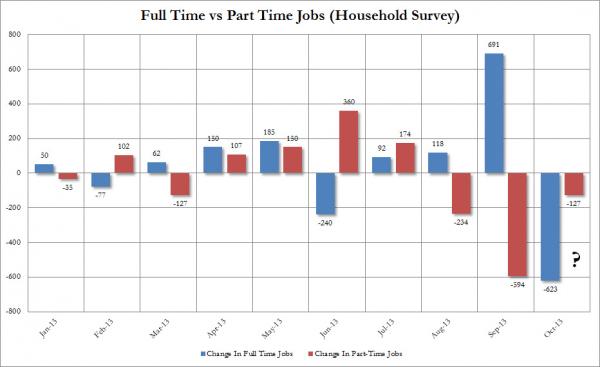