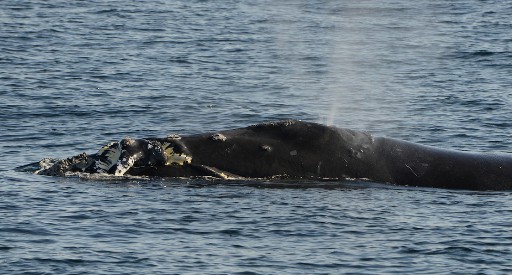 Vancouver Sun, Oct. 31, 2013: Second sighting of endangered North Pacific right whale in B.C. waters in 62 years […] “It’s exciting, kind of astonishing, really, to have two different animals sighted four months apart on our coast when there haven’t been any confirmed sightings for the last 62 years,” [John Ford, head of the cetacean research program at Pacific Biological Station in Nanaimo] said in an interview Thursday. “We were uncertain whether the species still occurred in Canadian waters and this clearly shows that they do.” The right whale, observed with a group of humpbacks, had a “nasty looking but healed wound” on the upper jaw, “very likely from a previous entanglement in fishing gear that he evidently survived,” Ford explained. […] Federal biologist James Pilkington made the first confirmed sighting in recent history of a right whale in B.C. waters on June 9, 2013, aboard the Canadian Coast Guard vessel Arrow Post off the west coast of Haida Gwaii. That whale was observed for a total of 17 hours over a few days feeding at the surface on copepods, zooplankton measuring about 10 millimetres. Only about 30 right whales are thought to exist in the eastern North Pacific. The last previous B.C. sighting dated to 1951 […]

LiveScience, Nov. 6, 2013: This is the second North Pacific right whale spotted in the area since June, an astonishing fact given that the last sighting before that was in 1951, […] North Pacific right whales, are incredibly endangered, with only 50 thought to live in the waters of the region. Another 200 or so are thought to migrate to the area around Japan for the summer, but are considered a distinct population

Huffington Post, Nov. 1, 2013: Right Whale Sighting: World’s Rarest Whale Seen Near Victoria […] Considered the rarest whale population in the world, the North Pacific right whale is not often spotted. But for the second time since 1951, the majestic creature was seen in B.C. waters.