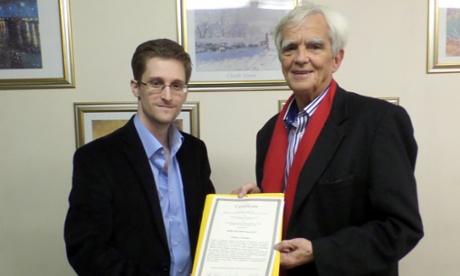 The former NSA employee this week appealed for clemency and an opportunity to address members of Congress about US surveillance. He also asked for international help to lobby the US to drop the charges against him. The White House, stung by domestic and international criticism, has shown growing appetite to rein in some of the NSA programmes that Snowden exposed but it has not softened its hostility to the 30-year-old fugitive.

Pfeiffer told ABC’s This Week that no clemency offers were being discussed following Snowden’s appeal in a letter released by a German lawmaker who met him in Moscow.

Feinstein, a Democratic senator from California, remained implacable. “He’s done this enormous disservice to our country. I think the answer is ‘no clemency’,” she told CBS’s Face the Nation.

The former NSA contractor could have blown the whistle on excesses by contacting the House and Senate intelligence committees, Feinstein said. “We would certainly have seen him … and looked at that information. That didn’t happen.”

Snowden has passed a trove of information to the Guardian and other media outlets since fleeing to Hong Kong in June before relocating to Russia, which granted him a year’s asylum. In a one-page letter given to Hans-Christian Stroebele, a lawmaker with Germany’s opposition Green Party, Snowden asked for charges to be dropped, saying: “Speaking the truth is not a crime. I am confident that with the support of the international community, the government of the United States will abandon this harmful behavior.”

An increasing number of public figures are calling for Snowden to be offered asylum in Germany, following his revelation that the NSA tapped chancellor Angela Merkel’s phone.

“Snowden has done the western world a great service. It is now up to us to help him,” Heiner Geissler, the former general secretary of Merkel’s Christian Democrats, wrote in Der Spiegel magazine. More than 50 public figures echoed the call.

That cut little ice with Rogers, a Michigan Republican and former FBI agent. He echoed Feinstein’s response on Face the Nation, saying the leaker had violated an oath of secrecy and stole information. “He needs to come back and own up,” Roger said.Rogers also accused Snowden of cooperating with Russian intelligence – “the Russians are not allowing him to stay in the country just because they think he’s a nice guy” – and of helping three al-Qaida-linked groups to change the way they communicate in order to evade US intercepts, putting troops’ lives at risk in Afghanistan.

Rogers, the NSA’s strongest congressional supporter, said the media and public’s focus should be not on supposed surveillance excesses but on efforts to counter terrorism and cyber attacks. “The bad guys candidly are not US intelligence agencies,” he said. “They are the good guys at the end of the day.”

“We did this in the 1930s and … that led to a whole bunch of misunderstandings that led to World War II that killed millions and millions of people. We did the same darn thing that led up to the [9/11] Osama bin Laden effort.”

He added: “Espionage is a French word, after all.”