King 5 News uses such a crappy embed code that it f***** up the entire website.

– Shocking Treatment of US Nuclear Whisteblowers: Sent to office in basement with rat poison after warning of Fukushima-like explosion — Another given office in storage room with drums of radioactive waste and asbestos soon after having chemotherapy (VIDEO) (ENENews, Nov 2, 2013):

KING 5 News, Nov. 1, 2013: Hanford whistleblower: ‘I was now the enemy’ […] [Dr. Walt] Tamosaitis determined that the mixers, as designed, would not be able to mix the waste sufficiently, posing a risk that heavy radioactive elements would collect at the bottom of the tanks and begin a nuclear chain reaction. The reaction, in turn, would generate large amounts of explosive hydrogen gas (a similar hydrogen build up at the Fukushima nuclear plant in Japan caused large explosions after the 2011 Tsunami damaged that facility). […] “The worst case scenario would be a criticality and trapping of hydrogen gas which could lead to a hydrogen explosion,” said Tamosaitis. […] URS moved Tamosaitis to another building where he was assigned to a makeshift office in the basement. He sat alone in a cramped space full of storage boxes, rat poison feeders and copy machines. He was not assigned any work and had no boss to report to. “The message was, ‘Don’t do what Walter did. Don’t raise issues. Shut up (and) do what we say,’” said Tamosaitis. […]  The Defense Nuclear Facility Safety Board and the Government Accountability Office both issued reports highlighting Tamosaitis’ work. And in early 2012 Energy Secretary Steven Chu ordered a halt to WTP construction. 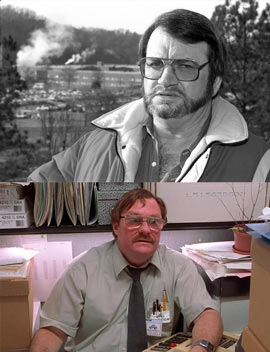 New York Times, Aug. 5, 2013: After Charles D. Varnadore complained about safety at the Oak Ridge National Laboratory […] his bosses moved him to an office containing radioactive waste. When an industrial hygienist recommended that either he or the waste be moved, he was put in a room contaminated with mercury [“visible mercury was in several places”]. […] His difficulties began in 1990, after he returned to work following colon cancer surgery. He found that his replacement had shortcomings in handling lab samples, and he pointed this out to his superiors […] he was given a storage room as an office […] The room contained bags and drums of radioactive waste, as well as bags of asbestos and chemical waste. […] “The only conclusion which can be drawn from this record is that they intentionally put him under stress with full knowledge that he was a cancer patient recovering from extensive surgery and lengthy chemotherapy,” the judge, Theodor P. Von Brand, wrote in his decision.  […] Judge Von Brand sent the matter to the labor secretary, Robert B. Reich [who] dismissed some of Mr. Varnadore’s charges on the ground that they had been filed too late, and he dismissed others because he did not believe that they had been proved conclusively. […]

Perhaps Mr. Tomaisitis would disagree with these statements in the New York Times article:

See also: Gundersen: They tried to crush us — Our house was foreclosed on, there was bankruptcy — We were followed, harassing calls — Got sued for $1.5 million (VIDEO)