‘Is The Food Supply Safe?’

Is radiation safe? (And that really should be a rhetorical question.)

CBC News, Nov. 2, 2013: Radiation from Japan nuclear plant arrives on Alaska coast […] Scientists at the University of Alaska are concerned about radiation leaking from Japan’s damaged Fukushima nuclear plant, and the lack of a monitoring plan. Some radiation has arrived in northern Alaska and along the west coast. That’s raised concern over contamination of fish and wildlife. More may be heading toward coastal communities […]

John Kelley, professor emeritus at the University of Alaska in Fairbanks: “The data they will need is not only past data but current data, and if no one is sampling anything then we won’t really know it, will we? The general concern was, is the food supply safe? And I don’t think anyone can really answer that definitively.” 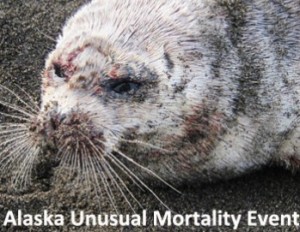 Douglas Dasher, researcher at the University of Alaska in Fairbanks: “The levels they are projecting in some of the models are in the ballpark of what they saw in the North Pacific in the 1960s.”