In a bizarre announcement yesterday, the U.S. Treasury Department boasted that the government of Jordan had closed on a $1.25 issuance of sovereign debt guaranteed by the U.S. government. While I am not sure how common it is for our nation to guarantee these types of issuances (comments would be appreciated), the announcement represents a gigantic slap in the face on multiple levels.

This guarantee marks the conclusion of a process that President Obama set in motion in March 2013 when he visited Jordan.  During his visit, President Obama noted that a U.S. guarantee, “can help deliver the results that Jordanians deserve… to see their schools better, their roads improved, healthcare, clean water all enhanced, the training that I know a lot of Jordanians seek, particularly young people, to get a job or to turn entrepreneurial skills into a business that creates even more jobs.” That vision was further affirmed by the signing of a loan guarantee agreement in Amman on August 14, 2013.

Did you catch that? The Treasury Department expressed its preoccupation with Jordanian healthcare on the same day it is revealed that the top hospitals in America will not accept Obamacare.

Oh, and good thing we are so concerned with Jordanian infrastructure spending. Meanwhile back in the USSA: 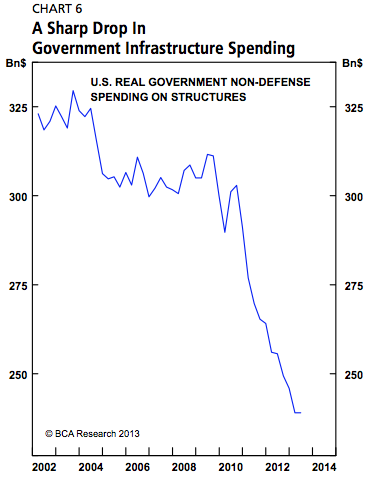 I’m not done yet. More from the U.S. Treasury’s press release:

The U.S. government is committed to supporting Jordan’s efforts to provide critical services to its citizens as it enacts economic reforms to increase Jordan’s macroeconomic stability and  hosts more than half a million refugees fleeing the violence inside Syria. This loan guarantee also reinforces Jordan’s work with other donors, including the International Monetary Fund (IMF) and International Bank for Reconstruction and Development (IBRD), to implement its economic reform agenda.

Violence inside Syria. Violence which the U.S. government has been doing its best to escalate…

Just another day in the Banana Republic.