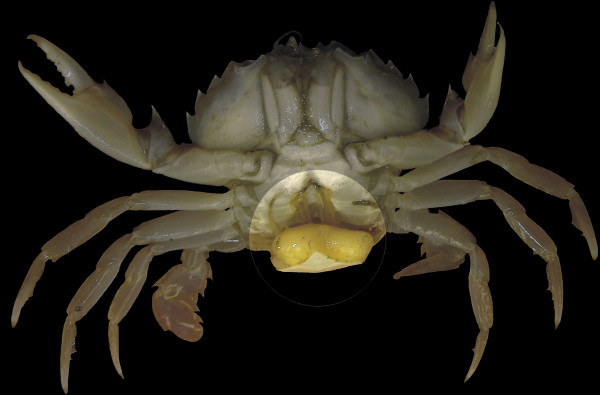 A rhizocephala bursting from the abdomen of a crab. Image source: wikipedia.

When I first learned about rhizocephalan barnacles I lost my appetite. I was taking a parasitology course, and even though I’d developed a thick skin, something about this insidious creature deeply disturbed me. Even now, the thought of one makes me shiver. I’ve never watched a movie monster, heard a fairy tale, or seen a video game with a villain more horrifying than this one. And unlike those monsters, this one is real. To understand the full terror of this monster, you have to put yourself in the place of another animal. These poor creatures are its victims, and you see them all the time. Imagine you’re a crab, and for full effect, imagine you’re male.

You’re lingering on the shoreline, the warm sun on your back, cool water in your gills. You’ve reached a large size, dodging the many dangers of youth. Life is going well. But today you begin to feel strange–maternal almost–as if there is something growing inside you, and in fact, something is. 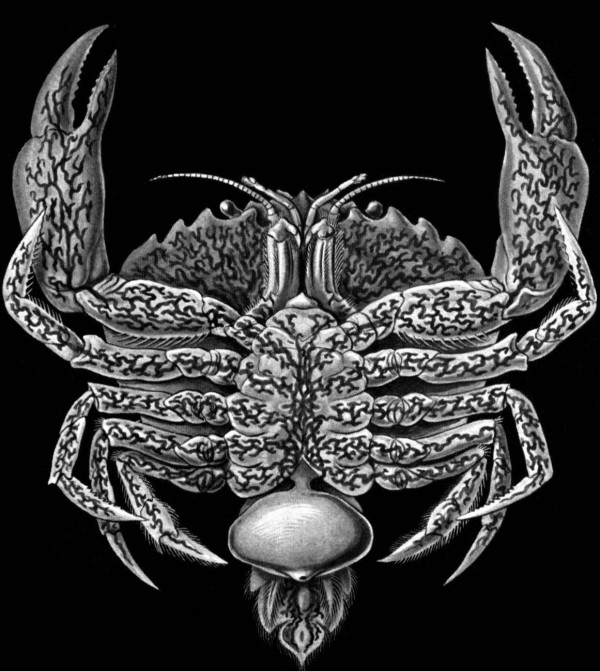 Can you feel her roots growing in your body? Illustrated by Haeckel. From Wikipedia Commons.

Its roots are crawling through your tissue, your gut, your brain. It’s a rhizocephalan barnacle, and it’s about to take you over.

Your new tormenter is a member of one of the strangest groups of animals known. The adult female body of the rhizocephalan is twisted and deformed, not resembling in any way its barnacle cousins living on rocks near shore. She has lost her hard shell, her legs, her eyes, and transformed into sickly yellow roots and sinuous twisting filaments that are slowly grow like black mould through your tissues. But she looked normal once: when she was young. As a juvenile she looked like a normal barnacle larva, only a few millimeters long. But her juvenile body had one terrible difference: her head was tipped with a needle protruding form her shell. When she found you, she used her body like a hypodermic syringe: stabbing you and injecting her own cells under your skin. All that’s left of her is now growing and spreading like a cancer through your system. You’ve stopped growing. Her fibrous tentacles are consuming your extra energy.

Just when it seems it couldn’t be worse, your abdomen explodes. You’re now sterile, and her gonads are erupting out from where your genitals are. Her tumorous ovaries now attract a male rhizocephalan larva, who injects his own cells into her. These grow into testicles within her body. She now has everything she needs for her next takeover.

But none of this bothers you now.  She has woven her threads through your brain. She’s been secreting chemicals to control you–you’ve forgotten who you are. You now believe you are female, and the bulge in your abdomen is a brood of your own eggs. Moreover, you are about to give birth. You care for and clean these eggs, as if they were your own.

One fateful evening, you feel a powerful impulse to move to the shallows and spawn–releasing your new young into the ebbing waves. Your body is now hard, deformed and feminized. Despite all this you look into the sea, grateful that you’ve created a new generation. Your bliss uninterrupted by the reality that you have now released an infection that will spread, perhaps to your brothers, your mother and your children. But any piece of you that might mourn for them is gone, or perhaps if there, unable to stop what you’ve become. You are a shell for a rhizocephalan now, basking under the watery moon and stars.