Following our earlier comments on the vulnerabilities of the Obamacare websites, the fact that the United States National Security Agency suddenly went offline Friday is still surprising. As RT reports, NSA.gov has been unavailable globally as of late Friday afternoon, and Twitter accounts belonging to people loosely affiliated with the Anonymous hacktivism movement have suggested they are responsible. 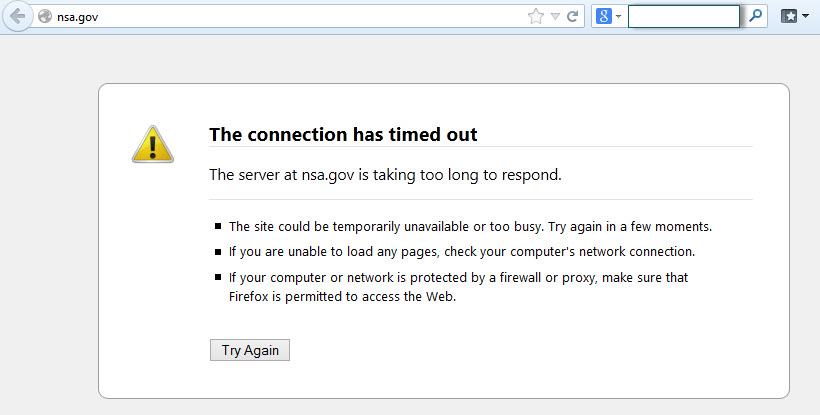 It is perhaps not entirely coincidental that there is a major “Stop Watching Us” rally scheduled for Saturday in Washington, DC.

where the following letter was sent to Congress:

We write to express our concern about recent reports published in the Guardian and the Washington Post, and acknowledged by the Obama Administration, which reveal secret spying by the National Security Agency (NSA) on phone records and Internet activity of people in the United States.

The Washington Post and the Guardian recently published reports based on information provided by an intelligence contractor showing how the NSA and the FBI are gaining broad access to data collected by nine of the leading U.S. Internet companies and sharing this information with foreign governments. As reported, the U.S. government is extracting audio, video, photographs, e-mails, documents, and connection logs that enable analysts to track a person’s movements and contacts over time. As a result, the contents of communications of people both abroad and in the U.S. can be swept in without any suspicion of crime or association with a terrorist organization.

Leaked reports also published by the Guardian and confirmed by the Administration reveal that the NSA is also abusing a controversial section of the PATRIOT Act to collect the call records of millions of Verizon customers. The data collected by the NSA includes every call made, the time of the call, the duration of the call, and other “identifying information” for millions of Verizon customers, including entirely domestic calls, regardless of whether those customers have ever been suspected of a crime. The Wall Street Journal has reported that other major carriers, including AT&T and Sprint, are subject to similar secret orders.

This type of blanket data collection by the government strikes at bedrock American values of freedom and privacy. This dragnet surveillance violates the First and Fourth Amendments of the U.S. Constitution, which protect citizens’ right to speak and associate anonymously, guard against unreasonable searches and seizures, and protect their right to privacy.

We are calling on Congress to take immediate action to halt this surveillance and provide a full public accounting of the NSA’s and the FBI’s data collection programs. We call on Congress to immediately and publicly:

Thank you for your attention to this matter.

Twitter users @AnonymousOwn3r and @TruthIzSexy both were quick to comment on the matter, and implied that a distributed denial-of-service attack, or DDoS, may have been waged as an act of protest against the NSA

So If it’s a attack comming from me, or maybe from a country? won’t say! It’s just looks like a start of a cyber war

‘Sir’ @BarackObama you haz problem? Perhaps you should check your national fucking security cos the NSA wont load? http://t.co/e6P0NHQYcO xD