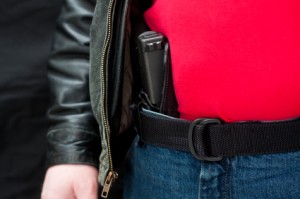 While people like Piers Morgan, Barack Obama and Dianne Feinstein continue to push fear-mongering over guns, a recent story makes the point that guns are not evil, but rather a good deterrent to evil. This couldn’t be more apparent than at a recent party that took place in Arizona, where a citizen who was carrying his weapon probably saved everyone at the party from a gunman with a rifle.

A 27-year-old man got into an argument at with some party goers. After a time, the man was asked to leave, and he did.

A short while later he returned. Armed with a rifle, he began firing off shots outside the home.

What happened next is reported by AZ Central:

The man pointed the rifle at partygoers and a 39-year-old partygoer pulled out a handgun and shot the 27 year old before police arrived, Glendale Police Department spokeswoman Officer Tracey Breeden said. The shooter did not try to leave and waited for officers to arrive.

The shooter has been cooperative with investigators, she said. He was questioned and released by detectives.

“This is standard procedure under these type of circumstances,” Breeden said. “Information and evidence detectives have gathered leads them to believe the 27-year-old was not only firing his rifle, endangering partygoers, but also pointed the weapon at other partygoers, endangering them, prior to the 39-year-old displaying a weapon and shooting the 27-year-old.”

The investigation is ongoing and charges are pending, Breeden said.

It almost makes me want to ask each party goer that was there, the same question that INTERPOL Secretary General Ronald K. Noble asked and that is would you rather live in an area that has gun prohibition or one that allows law abiding citizens to carry their weapons lawfully?

Now consider that nothing states that alcohol was involved, but story also indicates the party took place at a private residence.

I mention this because in many states concealed carry permit holders are not allowed to carry their weapons in restaurants that serve alcohol and bars, not because the owners have a problem with it, but because the state does.

When my wife and I completed our concealed carry course, I asked why firearms were not allowed in such places. The response was, “Alcohol and guns don’t mix.”

Now I presume alcohol was at this party, but I could be wrong. However, whether or not it was there or not is part of the point. Here was a young man that didn’t care what the law was and came armed with a rifle to the party after being told to leave.

Fortunately, the 39-year-old had enough sense to maintain his right to keep and bear arms and was able to stop the 27-year-old.

The same could be said of bars and restaurants. The issue is not a mixture of alcohol and firearms; it really isn’t. The issue is someone that respects the use of a firearms and has a moral compass on when to use it. Obviously the 27-year-old criminal in this case didn’t have either. I say, “Well done” to the gentleman that stopped him!
Read more at http://freedomoutpost.com/2013/10/mass-shooting-thwarted-arizona-concealed-carrier-think-socialist-gun-grabbers-will-mention/#JGk9M4eC1UZqBLAS.99