– Fukushima Radioactive Plume To Hit Shores Of U.S. & Canada For Many Decades – Removal Of Molten Cores Impossible For Hundreds Of Years, If Ever – Escape Of Radiation Virtually Unstoppable

San Diego Union Tribune, Oct. 21, 2013: […] there are few indications that engineers have gained the upper hand over the wreckage from the nuclear meltdown at Fukushima. The problems are a cause for concern even in San Diego, an ocean away. Though too diluted to affect human health, radionuclides riding Pacific Ocean currents are forecast to reach Southern California by 2016. […] “Nobody knows how to contain this thing because it’s a first-time” incident, said Kiyoshi Kurokawa, the lead author of a scathing parliamentary investigation that detailed how nuclear industry influence disarmed Japanese regulators. […]

Santa Maria Sun, Oct. 2, 2013: News broke late this summer that nuclear fallout from the meltdown at the Fukushima Daiichi nuclear plant in Japan would hit Californian shores sometime next year. But is there any risk to public health and safety? A recent international study has concluded that there isn’t, as have federal and local health officials. But that response hasn’t satisfied many residents […] Some of those people have warned of consequences at public meetings and begged local officials to do something […] 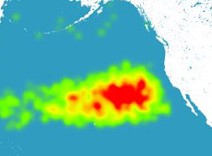 Response by Victor Rossi, co-author of an international study forecasting the spread of Fukushima’s cesium-137 in seawater (Emphasis Added): “In brief, considering the information presently available about the total amount of radioactive materials released into the ocean right after the accident, we found that the turbulent Kurushio current, the Kurushio extension, and the numerous eddies in the Pacific Ocean would have diluted substantially the plume. So there are no major worries to be had.” That being said, Rossi added that there remain “small uncertainties” and that researchers should continue monitoring the ocean […] The center has established a website […] at adrift.org.

Response from federal officials: A spokesman for [NOAA] referred all questions regarding [Rossi’s] study to the [EPA]. EPA spokesperson Ernesta Jones told the Sun that the federal agency continues to work closely with NOAA, the [DoE], as well as the [FDA] to follow the Fukushima oceanic leak. […] “To this day, the [RadNet] system continues to confirm that there are no harmful levels of radiation in the air reaching the U.S. from Japan,” Jones wrote in an e-mail. In a response to a set of follow-up questions, agency spokesperson Julia Valentine said the EPA is aware of [Rossi’s study], but didn’t have any further comment. She did say, however, that the agency’s RadNet system doesn’t specifically record radiation levels in seawater […]

Response by local officials in San Luis Obispo, California: Local officials similarly aren’t concerned about a radioactive plume, though they admittedly rely heavily on the feds for information to support that opinion. Ron Alsop, SLO County’s Emergency Services director told the Sun that, anecdotally, water is known to dilute radiation, and the first line of treatment for someone thought to be exposed to radiation is a shower. […] Rich Lichtenfels of the SLO County Health Agency told the Sun the agency performs baseline radiological surveys […] to compare […] to beaches once the dispersed plume is thought to reach U.S. waters. […]