– CA Nuclear Expert Daniel Hirsch: ‘We Could Have Large Numbers Of Cancer’ From Eating Fish

– TEPCO To Kill All Fish In Fukushima Nuclear Plant Port 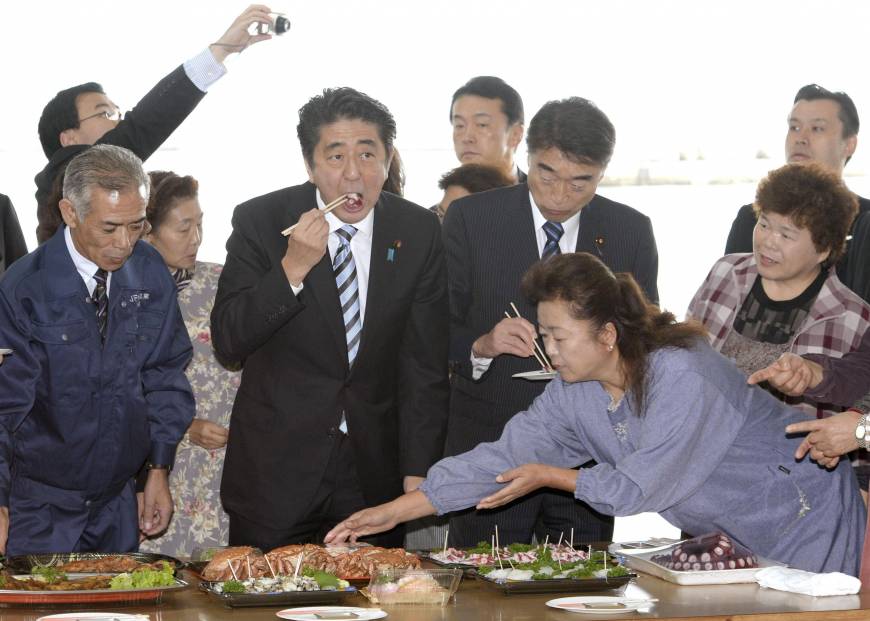 Stoical: Prime Minister Shinzo Abe (front, second from left) samples octopus and other marine produce caught off Fukushima Prefecture during a visit to the city of Soma on Saturday. | KYODO#

SOMA, FUKUSHIMA PREF. – Prime Minister Shinzo Abe visited the port of Soma in Fukushima Prefecture on Saturday and pledged efforts to dispel rumors about the safety of local fishery produce.

Abe took a firsthand look at Matsukawaura port, where fishermen resumed trial catches in late September after a monthlong suspension following the discovery that radioactive water has been spewing from the stricken Fukushima No. 1 nuclear plant.

He received an explanation about radiation checks on fishery products and a progress update on recovery work at the port, which was badly damaged by the March 2011 earthquake and tsunami.

“We will work to wipe out harmful rumors by giving out accurate information,” Abe said before local residents. After tasting octopus caught off Fukushima, he said, “I want everyone in the country to know they (fishery products from Fukushima) are good and safe.”

The prime minister later visited a temporary housing complex and a site chosen for collective relocation in the town of Shinchi in Fukushima and held talks with residents, who are expected to move to the site by the end of the year.

“This will be a model project. We will continue to make the utmost effort to facilitate the reconstruction of Fukushima,” Abe said.

It was Abe’s fifth visit to the prefecture since taking office last December.

2 thoughts on “Evil Lying Scum Shinzo Abe: ‘I Want Everyone In The Country To Know They (Fishery Products From Fukushima) Are Good And Safe’”