– Rice grown nearby Fukushima plant cleared for sale — Farmer: “I would not dare eat it… We feel guilty about growing it and selling it” (VIDEO) (ENENews, Oct 11, 2013): 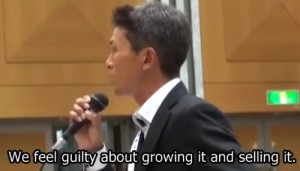 The Chosun Ilbo (English Edition), Oct. 10, 2013: Rice Grown Near Fukushima Cleared for Sale […] Rice grown in some areas within a 30 km radius of the stricken Fukushima nuclear power plant will be cleared for sale this year, but concerns remain. Some samples have tested positive for radiation well above the permitted level. So far only test farming of rice in the region was allowed. Fukushima Prefecture on Wednesday said 44 out of 52 sacks of 30-kg rice harvested in Minamisoma, 20 to 30 km from the power plant, likely exceeded the permissible levels of radioactive materials when tested with a conveyer-belt detector. The prefecture carried out thorough test of the 44 sacks, and detected 120 becquerels of cesium per kilogram, way over the permissible level of 100 becquerels. “It is possible to sell rice that does not exceed the level,” said a prefecture official. […]

Fukushima Farmers Negotiate with Japanese Government, Published August 31, 2013 – Farmer from Sukagawa, 60 km west of Fukushima Daiichi (at 1:45 in): Do you understand the meaning of ‘de’ in the word decontamination? We are just tilling deeply and spreading the radiation thinly. We are not removing the contamination. No wonder that the radiation level has not gone down. We measured the radioactivity in the air.  It has not gone down at all. We have not removed the contaminated soil. Of course not! The environment has not changed at all 2 years after the explosions. […] In Fukushima, all farm produce must be checked for the cesium level prior to shipping. The current government limit is 100 becquerels. The farmers know how many becquerels of cesium their produce contains. We can ship them if the reading is lower than 100. But I would not dare eat them myself. The consumers assume there is no radiation in the food they buy.  […] We farmers know better. We feel guilty about growing it and selling it. We won’t eat it ourselves, but we sell it.

Watch the emotional speeches from the Fukushima farmers here