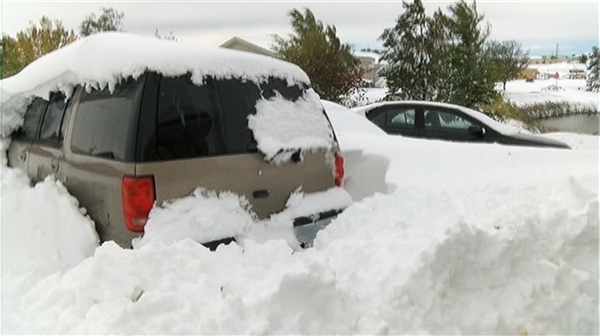 The storm was accompanied by hurricane-force wind gusts, especially Friday night, which drove some herds seeking shelter miles from their ranches. A trail of carcasses left a gruesome sight, said Martha Wierzbicki, emergency management director for Butte County, in the northwestern corner of the state.

Parts of South Dakota are in cleanup mode after a strong winter storm pounded some areas. Kirsten Swanson of NBC station KNBN reports.

Ranchers have no one to ask for help or reimbursement. That’s because Congress has yet to pass a new farm bill, which subsidizes agricultural producers.

And even if there were a farm bill, the government shutdown means nothing could be done under one anyway.

State Agriculture Secretary Lucas Lentsch called the early-season blizzard “devastating to our producers,” saying his agency was trying to figure out a response.

In the meantime, he said, the best farmers and ranchers can do is meticulously document their losses, with detailed photos, for use when and if claims can be processed.

The most immediate concern is proper disposal of the dead livestock, which state law says must be burned, buried or rendered within 36 hours — for the health not only of surviving herds but also for people.

“That can be a significant source of disease spread, so we want to make sure those carcasses are burned, buried or rendered as quickly as possible,” Dustin Oedekoven, South Dakota’s state veterinarian, told the Journal.

But the South Dakota Cattlemen’s Association warned that the effects would be felt for years afterward. Not only were tens of thousands of calves killed, but so were thousands more cows that would have delivered calves next year.

Most of the diseases have incubation periods of a week or two, so those problems can’t yet be assessed, the extension said.

“This is absolutely, totally devastating,” Steve Schell, a rancher in Caputa, near Mount Rushmore, told the Rapid City newspaper. “This is horrendous. I mean the death loss of these cows in this county is unbelievable.”