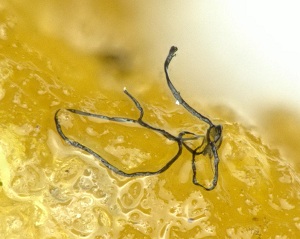 The Health Ranger’s forensic food investigation of Chicken McNuggets two months ago is making new waves across the industry. A new study published in the American Journal of Medicine appears to have been inspired by the Natural News publishing of photos revealing “strange fibers” in Chicken McNuggets, and it is now exploding across the mainstream media.

Another headline from The Atlantic says, “The Three Grossest Sentences You’ll Read About Chicken Nuggets Today.”

All the stories refer to a forensic microscopic investigation of chicken nuggets revealing that they contain all sorts of mysterious ingredients which are not chicken meat.

These stories were published on the Drudge Report and hundreds of other websites, but the mainstream media of course ignored them because the media has been ordered to never link to NaturalNews.com, even when we are the source of original research.

What’s fascinating about this research published in the American Journal of Medicine is that it appears to be strangely similar to my original forensic food investigations story published here on Natural News. Even the explanation of the lead researcher sounds very similar to what I wrote months earlier.

As Dr. Richard deShazo says in his video:

“As soon as he did the autopsy on the chicken nugget, he said you gotta come look at this. I can’t believe it, there’s very little meat in this chicken nugget, it’s mostly other stuff.”

This is very similar to my own findings from the Natural News Forensic Food Lab, published on August 16, 2013, where I stated:

Under carefully controlled conditions, I then examined the Chicken McNuggets under a high-powered digital microscope, expecting to see only processed chicken bits and a fried outer coating. But what I found instead shocked even me… [from the video] I did not find anything that resembled chicken.

What I appreciate about all this, by the way, is that Dr. deShazo’s team has reproduced and confirmed my original scientific findings. This is encouraging, as it means the Natural News Forensic Food Lab is now inspiring other scientists to test our findings and independently reproduce them. This is yet more confirmation of the value of the original scientific research we are conducting here at Natural News while publishing exclusive, original stories that break new ground in investigative journalism.

We’re just getting started, of course. We have dozens of other exciting forensic food research projects under way, and we will be reporting a great number of scientific findings in the months ahead, all based on original research I am personally conducting at the Natural News Forensic Food Lab. (And yes, I still have that Big Mac in the freezer, ready to put under the ‘scope…)

As you might well expect, this original research will inspire yet more scientists to replicate and confirm our findings, and together we can bring more transparency to the food industry which has traditionally operated behind closed doors when it comes to processed food ingredients and contaminants.

We welcome all scientists from around the world to subscribe to the Natural News email newsletter (see subscribe form, below) and receive direct email notifications as we publish new, original scientific research.

We also welcome scientific journals who wish to publish our upcoming original research to contact us more details. We are on the verge of publishing some of the most exciting, original and groundbreaking research the food industry has ever witnessed, and we are open to invitations from scientific journals who wish to benefit from the enormous exposure and publicity that will come from publishing our upcoming research, all of which adheres to strict scientific methods, integrity and reproducibility.

Sources for this article include:
http://news.yahoo.com/just-chicken-nugget-13…

1 thought on “Scientists Confirm: McDonald’s ‘Chicken’ McNuggets Are Less Than Half Chicken Meat!”