Kyodo, Oct. 4, 2013: Summoning Tepco President Naomi Hirose after a series of recent spills at the crippled power plant, Katsuhiko Ikeda, head of the NRA secretariat, tore into the utility for “rudimentary mistakes” that caused the toxic water problem and said its management in the field was “significantly deteriorating.” 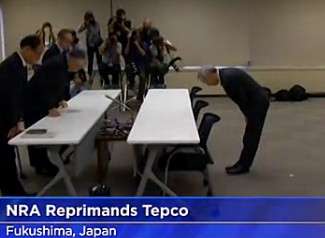 Xinhua, Oct. 4, 2013: Ikeda insisted the utility formulate an immediate strategy to deal with the latest crisis and slammed TEPCO’s management for its extremely poor organizational and practical systems that have led to human error causing irreversible radioactive damage to the environment. […]

NHK Newsline, Oct. 4, 2013: “I’m terribly sorry for the mistakes we have made. We mishandled the leaking wastewater, and that is affecting the environment.” – Naomi Hirose, Tepco President