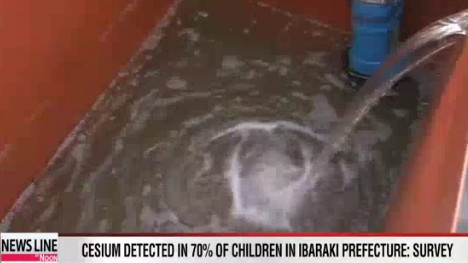 – TV: 70% of children tested are contaminated with radioactive cesium — All of them from outside Fukushima Prefecture (VIDEO) (ENENews, Oct 3, 2013):

Arirang News, Oct. 3, 2013: Over in Japan, new reports are adding to concerns about the radiation leaking from the Fukushima power plant. […] In a related development, a recent report says cesium has been detected in 70 percent of children living near the capital of Ibaraki Prefecture, which borders Fukushima. The Ibaraki Prefecture Cooperative Association says cesium had been detected in 58 of the 85 children […]

Arirang News, Oct. 3, 2013: […] a recent report by the Ibaraki Prefecture Cooperative Association shows cesium has been detected in urine samples of 70 percent of children living near the capital of Ibaraki […]

Weekly Asahi, Oct. 4, 2013 (Google Translation): […] First, let’s introduce the shocking data that was available […] the result of a urine test that was conducted for children from 0 to 18 years who live in [15] cities and towns [including] Chiba, Ibaraki Matsudo, Kashiwa [a Tokyo suburb], Tsukuba […]