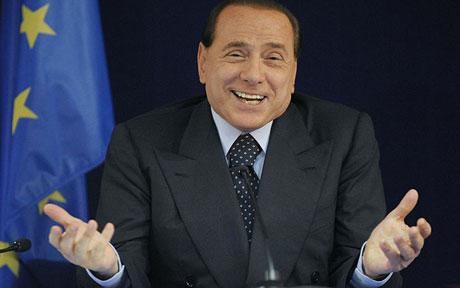 UPDATE: Reuters reports that 20 senators from Berlusconi’s party are preparing to create new party if Berlusconi does not soften stance against PM Letta – EUR and Italian Bonds are ramping.

*AS MANY AS 20 BERLUSCONI SENATORS MAY LEAVE PDL: REUTERS 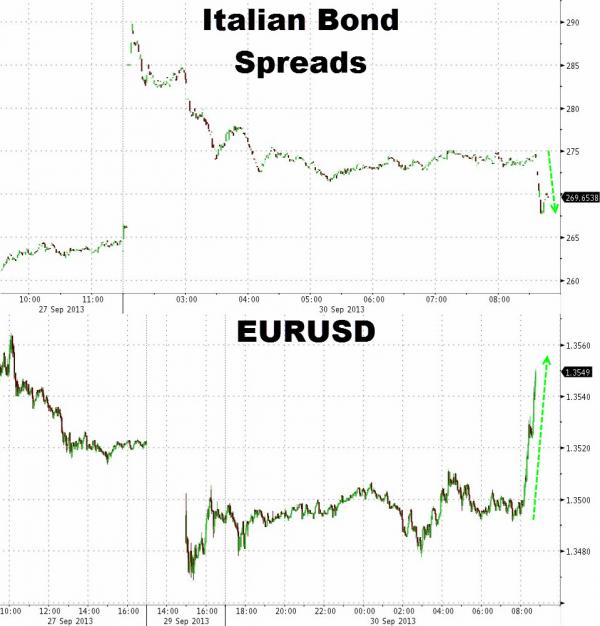 Berlusconi faces demands from his lawmakers to back down on confrontation with Letta, Reuters reports citing party official.

Before this we noted:

With Italian bond spreads 35bps wider in the last few days and the FTSEMIB stock index tumbling, it is clear the uncertainty in Italian politics is raising anxiety levels. The rest of Europe is catching that cold too (especially Greece and Spain). As Deutsche Bank notes below in the brief but complete summary of where we go next, the various scenarios that are possible, and market reactions, the actions represent the acceleration of an end to a very fragile environment.

On Saturday (28 Sept.), Berlusconi called for the resignation of the ministers of his party (PDL). All five ministers resigned from the cabinet, but three of them implicitly criticised the decision of de facto bringing down the government. The move came in after PM Letta (PD) announced late on Friday that he would ask for a confidence vote early this week. Recall that on 25 Sept., the MPs of the PDL had threatened to resign if the Senate Committee on 4 Oct. decides for Berlusconi’s expulsion from the Senate due to his convictions for tax fraud. A decision that will have to be confirmed by the whole Senate around 20 Oct.

The actions represent the acceleration of an end to a very fragile government. A government that has not only failed to push through any significant reform, but has even promoted some counterproductive policies (e.g., cutting property taxes rather than labour taxes).

What happens next? Towards a new government crisis

Uncertainty remains unusually high even by Italian standards. We expect that the Italian government will formally fall after a confidence vote probably on 2 Oct., leaving us with the following tentative scenarios:

Base case: a new coalition is patched together with PD still at the helm with support from some PDL and Five Star Movement (5SM) members. This government would have only limited scope: approve the 2014 budget and a new electoral law ahead of new elections in spring 2014. Recall that the centre-left has a majority in the lower house. So the Senate is the key battleground. 161 votes are needed to obtain a Senate majority. Assuming the PD (108 minus the Senate President), Mario Monti’s Scelta Civica (20) and Senators for autonomous regions (10) support a new government, 24 additional votes are needed. Extra support would have to come from dissenters within the 5SM (50) and PDL (91) as well as from ex-5SM senators (4), Sel (7) and senators for life (5). The ensuing government would be once again very fragile.

Alternative scenario: Failure to form a new government coalition, which would trigger early elections in late 2013 or early 2014. On the one hand, President Napolitano repeatedly stated he wants to avoid early elections with the current electoral law.1 Note that current polls suggest that with the current law new elections are likely to result in another stalemate. On the other hand, on Sunday Napolitano did not hint, as he did in the past, to the possibility he could resign to block immediate early elections (a new president would have to be elected).

In any event, with the OMT in place, we would not expect a market stress worse than the one seen after the February 2013 elections, unless (i) the PD fails to unite behind a strong candidate and (ii) opinion polls show that a populist or anti-euro party clearly leads in the opinion polls.