Wish I would have seen and posted this earlier.

A cloud of Iodine-131 has reached France while the recent 5.3 Fukushima earthquake is sending a new radiation plume around the world according to a recent story from Bobby1′sBlog. This latest plume is expected to arrive on the West Coast of America on Tuesday, September 24th. With radiation now spreading across the entire Northern hemisphere and no end in sight, are we reaching the ‘beginning of the end’? Two videos below confirm the severity of this ongoing doomsday situation.

An earthquake that rocked Japan just south of the Fukushima area shortly after midnight on September 20 (Japan time) sent a new plume of radiation across the Pacific Ocean. Apparently radiation measurements in this area have temporarily spiked.

This new plume would arrive on the west coast around Tuesday, Sept. 24. Previous earthquakes have also generated plumes. I remember that the one that arrived after the Jan. 1, 2012 quake was really nasty.

In a previous discussion Iodine-131 from latest criticality it was noted that the iodine spike in Chiba prefecture sludge was deposited in the period August 7 through August 20. According to CRIIRAD, Montélimar, France had spikes in alpha and beta atmospheric radiation on September 4-7. Rhône river water in Avignon showed a spike in iodine-131 on Sept. 7. The iodine cloud must have widened and dispersed quite a bit in its journey across the northern hemisphere… and 75% or more of it would have decayed by the time it reached France. So it must have been quite a substantial radioactive cloud.

Fukushima not only affects Japan, but the Pacific ocean, North America, and Europe too. Australia has had average radiation levels increase substantially, also. 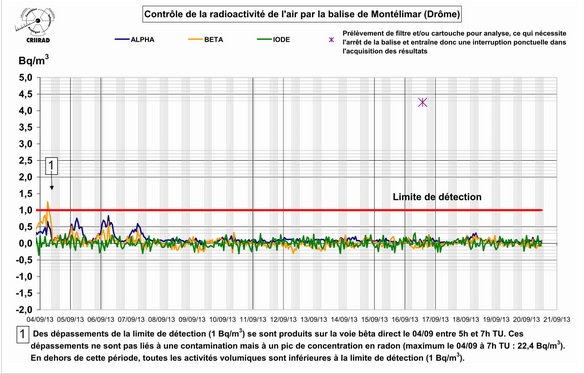 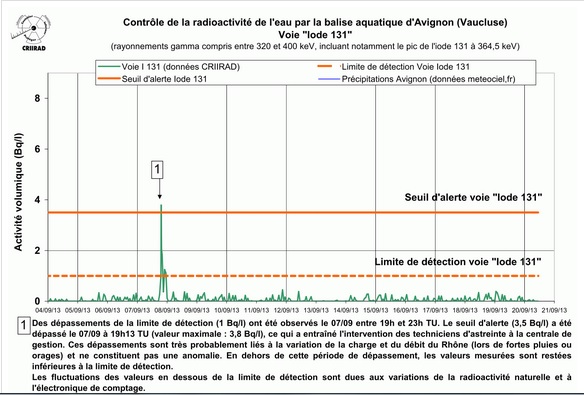