“To invite for-profit prison guards to conduct law enforcement actions in a high school is perhaps the most direct expression of the ‘schools-to-prison pipeline’ I’ve ever seen,”

– A Deep Look into the Shady World of the Private Prison Industry (Liberty Blitzkrieg Sep 23, 2013):

Private prisons are antithetical to a free people. Of all the functions a civilized society should relegate to the public sector, it’s abundantly clear incarceration should be at the very top of the list. Jailing individuals is a public cost that a society takes on in order to ensure there are consequences to breaking certain rules that have been deemed dangerous to the happiness and quality of life within a given population. However, the end goal of any civilized culture must be to try to keep these cost as low possible. This should  be achieved by having as few people as possible incarcerated, which is most optimally achieved by reducing incidents of criminality within the population. Given incarceration is an undesirable (albeit necessary) part of any society, the idea is certainly not to incentivize increased incarceration by making it extremely profitable. This is a perverse incentive, and one that is strongly encouraged by the private prison industry to the detriment of society.

I’ve written many highlighting the negative consequences of the private prison industry, and these have focused on the two biggest names in the space. Corrections Corp of America (stock ticker, CXW) and GEO Group. A few of my most popular articles on the topic are:

In the Public Interest has taken this a step further in its recent excellent report titled: Criminal: How Lockup Quotas and “Low-Crime Taxes” Guarantee Profits for Private Prison Corporations.

In the Public Interest describes itself as:

A comprehensive resource center on privatization and responsible contracting.  It is committed to equipping citizens, public officials, advocacy groups, and researchers with the information, ideas, and other resources they need to ensure that public contracts with private entities are transparent, fair, well-managed, and effectively monitored, and that those contracts meet the long-term needs of communities.

Their report explains how private prison companies insist that states embed “occupancy guarantees” into their contracts with the public sector. They estimate that at least 65% of all private prison contracts have such guarantees, and in some states, like Arizona, the guarantee is a shockingly high 100%. This leads to overcrowding in many instances, and sometimes violent offenders are placed in prisons set up for nonviolent offenses just to fill the quotas. In the event that the beds can’t be filled, the taxpayer makes up the difference to the private prison company. They win no matter what. It’s just more crony capitalism. Below are some highlights from this excellent report.

In 2012, Corrections Corporation of America (CCA), the largest for-profit private prison company in the country, sent a letter to 48 state governors offering to buy their public prisons. CCA offered to buy and operate a state’s prison in exchange for a 20-year contract, which would include a 90 percent occupancy rate guarantee for the entire term. Essentially, the state would have to guarantee that its prison would be 90 percent filled for the next 20 years, or pay the company for unused prison beds if the number of inmates dipped below 90 percent capacity at any point during the contract term (a “low-crime tax” that essentially penalizes taxpayers when prison incarceration rates fall). Fortunately, no state took CCA up on its outrageous offer. But many private prison companies have been successful at inserting occupancy guarantee provisions into prison privatization contracts, requiring states to maintain high occupancy levels in their private prisons.

These contract clauses incentivize keeping prison beds filled, which runs counter to many states’ public policy goals of reducing the prison population and increasing efforts for inmate rehabilitation. When policymakers received the 2012 CCA letter, some worried the terms of CCA’s offer would encourage criminal justice officials to seek harsher sentences to maintain the occupancy rates required by a contract. Policy decisions should be based on creating and maintaining a just criminal justice system that protects the public interest, not ensuring corporate profits.

The private prison industry has promoted policies and practices that increase the number of people who enter and stay in prison. It is no surprise that the two major private prison companies, CCA and GEO Group, have had a hand in shaping and pushing for criminal justice policies such as mandatory minimum sentences that favor increased incarceration.

Of the contracts that we reviewed, 41 (65 percent) contained quotas. These occupancy requirements were between 80 percent and 100 percent, with many around 90 percent. The highest bed guarantee requirements were from Arizona, Louisiana, Oklahoma, and Virginia. 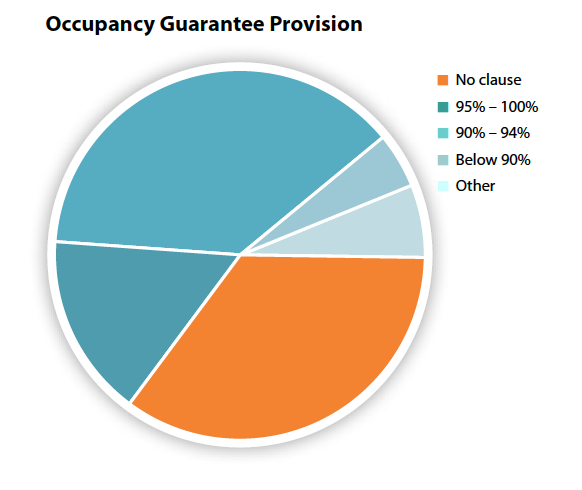 In Colorado
In 2012, the state began a utilization study to analyze which facilities made the most sense to close, but did not want any to shut down any facilities until the formal analysis was complete. In response to these preliminary discussions, CCA threatened to close one of its private facilities. Behind closed doors and without any public hearings, CCA and the Governor’s Office and the Joint Budget Committee negotiated a deal. In exchange for keeping the facility open, the state agreed to a bed guarantee, which required Colorado to keep at least 3,300 prisoners in the three CCA facilities, at an annual rate of $20,000 per inmate for the 2013 fiscal year.

In Ohio
The 2011 sale of the Lake Erie Correctional Institution in Conneaut, Ohio, to CCA was lauded by the private prison industry as an innovative cost-cutting move that would save the state of Ohio money, while improving the quality of services provided to inmates. A look at prison operations after the sale tells a very different story.

Bundled with the sale of the facility was a 20-year contract between the Ohio Department of Rehabilitation and Correction and CCA for operation of the prison. This contract includes a 90 percent bed guarantee clause, which holds Ohio, and ultimately its taxpayers, accountable for ensuring that 1,530 of the 1,700 available beds in the prison are occupied, or for compensating for unused beds. After purchasing the prison, CCA squeezed in an additional 300 beds, even converting an area where prisoner re-entry classes were held into sleeping space. A November 2012 government audit found that the addition of the 300 beds brought the facility out of compliance with minimum square footage per inmate requirements. The high occupancy requirement, especially when applied to a facility not originally designed for the additional 300 converted beds, has contributed to overcrowding, and the deplorable conditions and safety issues that persist in the facility.

In the North Coast Correctional Treatment Facility in Ohio ITPI found that:

Originally intended to house primarily drunk-driving offenders, the bed guarantee ensured that even if the state of Ohio did not convict 665 persons of felony drunk driving offenses, they would pay CiviGenics for that level of operation in their 700-person facility. In an effort to fill North Coast to 95 percent capacity, the state sent inmates who had been convicted of more serious crimes, including sexual battery, assault, arson, manslaughter, and robbery, when it could not fill the facility with drunken-driving offenders. The facility, designed to hold only felony drunken-driving and nonviolent drug offenders, was not properly equipped for these changes in the inmate population, and the facility suffered from riots, safety problems, and other contract violations, as well as unstable staffing, including four different people serving as warden. Ultimately, the contract was taken from CiviGenics and given to another private prison company, Management Training Corporation, and later combined with the Grafton Correctional Institution and returned to public control.

When you make incarceration highly profitable, you’ll get more of it. Just like war, spying, Wall Street theft and so many other plagues that we are irrationally encouraging in the U.S. today. It all needs to stop.