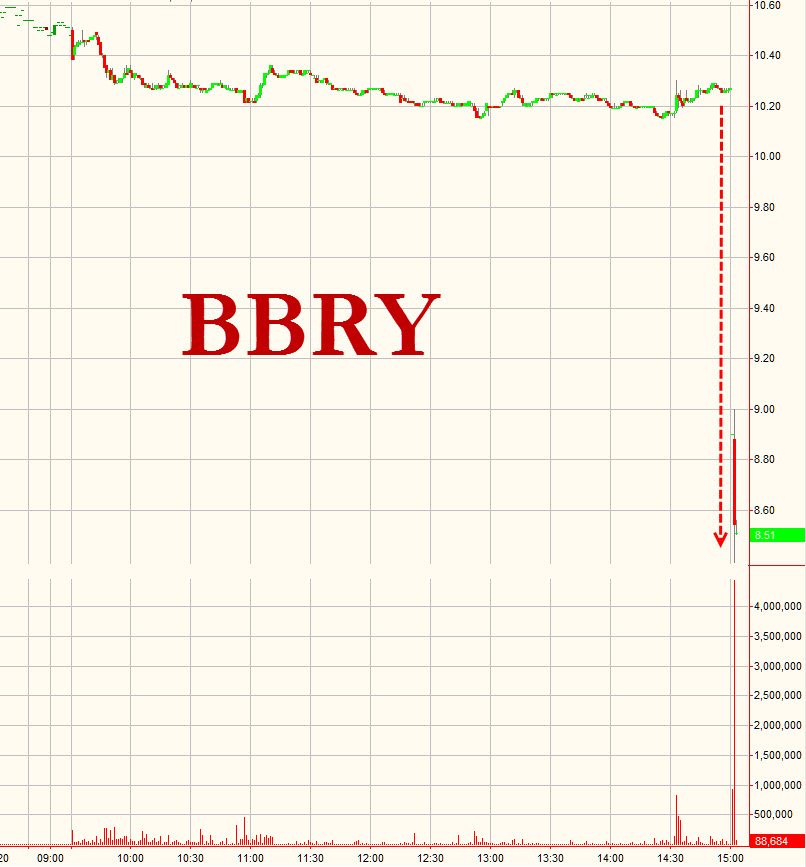 So much for the 8 analysts who have “Buys”…

Having risen phoenix-like off the lows in July, it seems Blackberry is echoing the Eastman Kodaks of the world. Releasing its earnings early, the results are dramatically worse than expected:

The last bullet point is great news: think of all the cash that will go toward dividends and stock buybacks…

Shares are still halted for now at $10.27; though we remind readers that while the low of $8.57 is not that far away, in the new normal (and a 33% short interest) where bad news is good, nothing would surprise us on the open.

As a consequence of the more intense competition the Company is experiencing in its hardware business, it expects to report a primarily non-cash, pre-tax charge against inventory and supply commitments in the second quarter of approximately $930 million to $960 million, which is primarily attributable to BlackBerry Z10 devices.

The current quarter will also include a pre-tax restructuring charge in the approximate amount of $72 million reflecting ongoing cost efficiency initiatives.

At the end of the second quarter, total cash, cash equivalents and investments is estimated to be approximately $2.6 billion. The Company has no debt.

The preliminary, unaudited information provided above is based on the Company’s current estimate of results from operations for the second quarter of Fiscal 2014 and remains subject to change based on the Company’s ongoing review of results, the subsequent occurrence or identification of events prior to closing of the review and any further adjustments made in connection with closing and review procedures. All figures in this release are in U.S. dollars and U.S. GAAP, except where otherwise indicated.

As part of the Company’s focus on enhancing its financial results, and in response to the increasing competition in the smartphone market, BlackBerry also announced plans to transition its future smartphone portfolio from six devices to four. The portfolio will focus on enterprise and prosumer-centric targeted devices, including 2 high-end devices and 2 entry-level devices in all-touch and QWERTY models. With the launch of the BlackBerry Z30 – the next generation high-tier smartphone built on the BlackBerry 10 platform — this week, the Company will re-tier the BlackBerry Z10 smartphone to make it available to a broader, entry-level audience. At the same time, the Special Committee of the Company’s Board of Directors continues to evaluate all strategic alternatives for the Company.

Thorsten Heins, President and Chief Executive Officer of BlackBerry said, “We are implementing the difficult, but necessary operational changes announced today to address our position in a maturing and more competitive industry, and to drive the company toward profitability. Going forward, we plan to refocus our offering on our end-to-end solution of hardware, software and services for enterprises and the productive, professional end user. This puts us squarely on target with the customers that helped build BlackBerry into the leading brand today for enterprise security, manageability and reliability.”

The Company continues to see increasing penetration of BES 10 with more than 25,000 commercial and test servers installed to date, compared to 19,000 in July 2013.

“Our enterprise business continues to reflect the trust that governments and businesses have placed in the BlackBerry platform,” added Heins. “Security matters and enterprises know the gold standard in enterprise mobility is BlackBerry.”