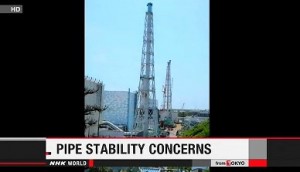 NHK Newsline, Sept. 19, 2013 (Transcript Excerpts): The people in charge of the Fukushima Daiichi nuclear plant have yet another problem on their hands. They say they found cracks in the brace supporting an exhaust pipe. Authorities are concerned the pipe could collapse in another earthquake […] Officials with Tepco say they spotted cracks in 8 places on the steel brace that holds the pipe upright. […] Overseers at the nuclear regulation authority are demanding that company officials investigate immediately. They want to know if the structure can withstand another earthquake.

NHK WORLD English, Sept. 18, 2013: […] workers on Wednesday discovered the cracks and cuts at 8 places in the buttress about 66 meters above the ground. The Nuclear Regulation Authority has ordered the company to assess the capacity of the pipe to withstand an earthquake as quickly as possible. The 120-meter vertical pipe stands between the number-1 and number-2 reactor buildings. […] they believe the 2011 earthquake damaged the steel framework. They say they have not observed any obvious damage in the pipe itself. The officials say they are considering how to access the pipe to assess its strength. The area around the pipe is contaminated with high levels of radiation measuring 10 sieverts per hour.