The froth is back. As we noted yesterday, corporate leverage has never been higher – higher now than when the Fed warned of froth, and as the BIS (following their “party’s over” rant 3 months ago) former chief economist now warns, “this looks like to me like 2007 all over again, but even worse.” The share of “leveraged loans” or extreme forms of credit risk, used by the poorest corporate borrowers, has soared to an all-time high of 45% – 10 percentage points higher than at the peak of the crisis in 2007.

As The Telegraph reports, ex-BIS Chief Economist William White exclaims, “All the previous imbalances are still there. Total public and private debt levels are 30pc higher as a share of GDP in the advanced economies than they were then, and we have added a whole new problem with bubbles in emerging markets that are ending in a boom-bust cycle.”

Crucially, the BIS warns, nobody knows how far global borrowing costs will rise as the Fed tightens or “how disorderly the process might be… the challenge is to be prepared.” This means, in their view, “avoiding the tempatation to believe the market will remain liquid under stress – the illusion of liquidity.”

The Swiss-based `bank of central banks’ said a hunt for yield was luring investors en masse into high-risk instruments, “a phenomenon reminiscent of exuberance prior to the global financial crisis”.…

[The BIS] was the only major global body that clearly foresaw the global banking crisis, calling early for a change of policy at a time when others were being swept along by the euphoria of the era.

Mr White said the five years since Lehman have largely been wasted, leaving a global system that is even more unbalanced, and may be running out of lifelines. “The ultimate driver for the whole world is the US interest rate and as this goes up there will be fall-out for everybody. The trigger could be Fed tapering but there are a lot of things that can go wrong. I very am worried that Abenomics could go awry in Japan, and Europe remains exceedingly vulnerable to outside shocks.”

The BIS quietly scolded Bank of England Governor Mark Carney and his eurozone counterpart Mario Draghi, saying the attempt to use “forward guidance” to hold down long-term rates by rhetoric alone had essentially failed. “There are limits as to how far good communications can steer markets. Those limits have become all too apparent,” said Mr Borio.

Think its different this time and that we are indeed invincible – after all Maria Bartiromo and Hank Paulson told us so on Meet The Press this morning, right? Wrong! Here are the fact… (Via The BIS),

A trend favouring riskier lending was also evident in the syndicated loans market. A concrete manifestation was the growing popularity of “leveraged” loans, which are extended to low-rated, highly leveraged borrowers paying spreads above a certain threshold. The share of these loans in total new signings reached 45% by mid-2013, 30 percentage points above the trough during the crisis and 10 percentage points above the pre-crisis peak. 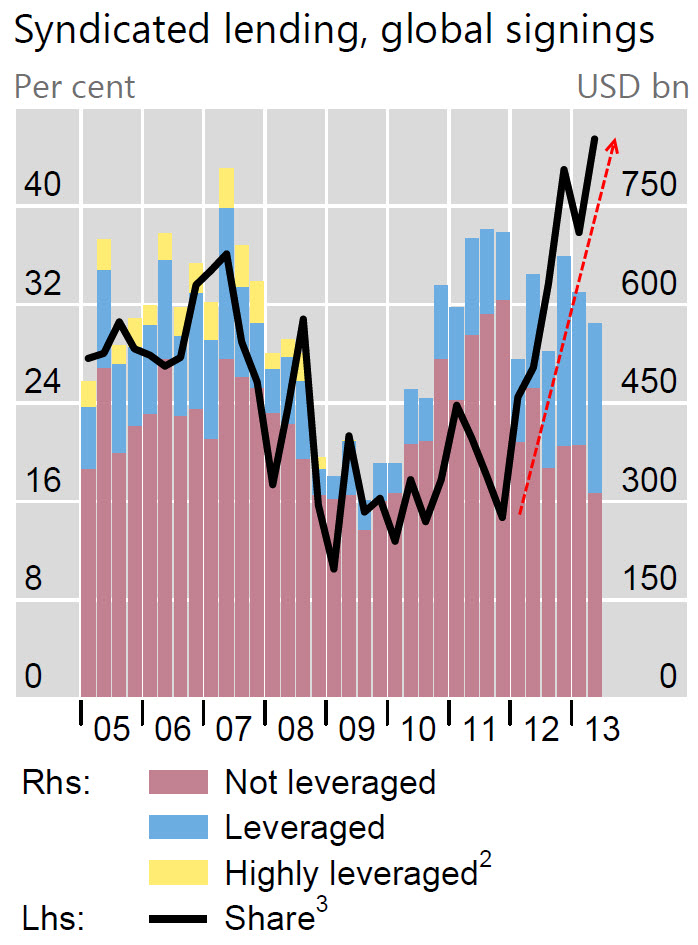 Market commentary attributed part of this increase to renewed investor demand for collateral loan obligations, which furthered a shift of negotiating power to borrowers. Thus, just as leveraged loans were gaining in importance, a declining portion of the new issuance volume featured creditor protection in the form of covenants. 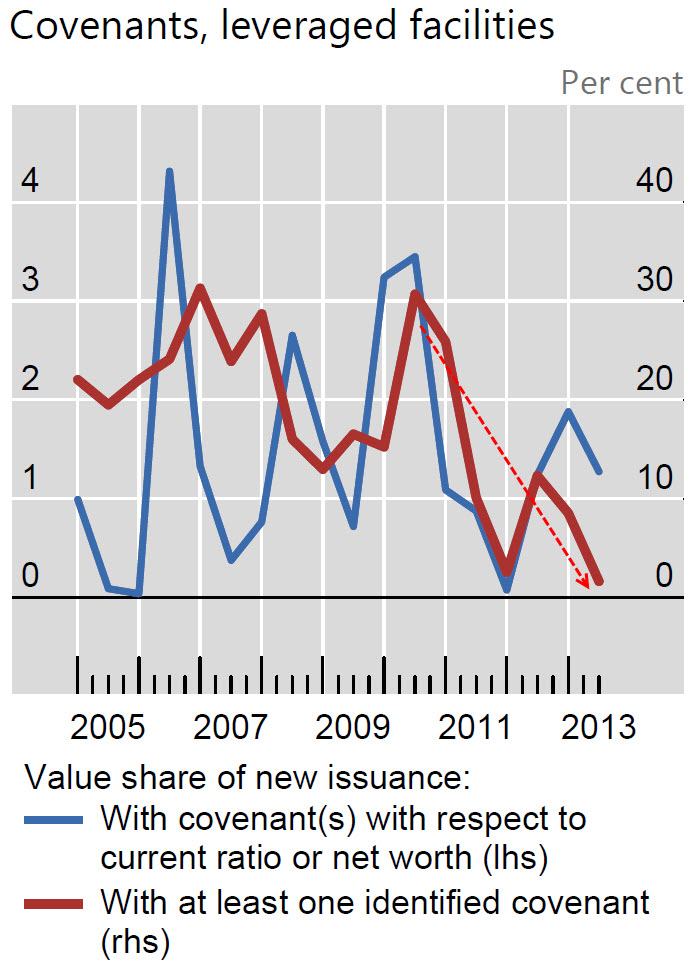 and so back to Mr. White for the endgame…

Mr White said the world has become addicted to easy money, with rates falling ever lower with each cycle and each crisis. There is little ammunition left if the system buckles again. “I don’t know what they will do: Abenomics for the world I suppose, but this is the last refuge of the scoundrel,” he said.